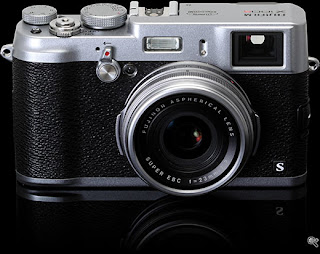 This is not a camera review. You have been warned.

I'm ready for a new camera. The one pictured above is the one. I've thought about the higher-end models, the X-Pro1 and the X-E1, but this is it. I'm ready. The price and features are right. They have addressed most of the issues the were present in the X100.

I think I actually like the idea of not being able to change lenses. It pleases me.

I don't like always putting the period " . " inside the quotation marks. It feels wrong, always has. What if the portion quoted is not the end of the statement that is being quoted?

Why should punctuation that assists the structure of a sentence be quoted in another, where it doesn't occur, or belong?

Do you use an ellipsis and end the sentence that way, like "this..."

Where's David Foster Wallace when you need him?

Okay, one last thing about the lost books. I've unravelled the mystery. Once, a friend, a regular reader of this site, was helping me clean out my apartment. I was turning 40 and she decided what I needed was a sort of "queer eye for the straight guy" makeover. In this scenario she is a queer guy.

She convinced me to throw out lots of stuff. She told me that I was getting to be an old guy, with too much crap piled up, that no woman who might come over would like what she saw. So, boxes and boxes went down to the street. At some point in her supervising of all of my manic energy she made herself comfortable, seated in the window frame, and began having a phone conversation with a mutual friend of ours while smoking pot and drinking up all of the wine.

We were listening to The Cure's "Seventeen Seconds" album, if I remember correctly.

I was getting rid of stuff that made me look "old."  (See, the period feels right there but then do I put another period after this bracket: )

I threw out video cassettes (Who has a vcr any more? she queried), framed artwork that I was never going to hang on any wall, a table, clothes, an enormous box of old Apple t-shirts, junk. Lots and lots of junk.

While she was chatting I do remember filling a box or two with books. In my mania I remember thinking that nobody reads books from before the 20th century any more and that I should start reading more contemporary stuff (Don't try to agree or disagree with the logic. It is pointless). But now I remember.

Out went Melville, Gide, Kant, Lewis, Nietzsche, etc.  All boxed up and taken down to the street, presumably to make way for more current and "hip" writers, like Murakami and Saramago. (Ignore the fact that not all of these writers satisfy the chronology of my manic purge.)

So, the mystery is settled. I did this to myself.

Sunday, I went through thousands of old images as quickly as my eyes would allow. I had vaguely remembered taking some pictures of the interior of my old apartment in NYC. Sure enough, I found them, there were the bookshelves, but the missing books weren't there. I dug deeper through my history. The pictures became more sparse as I went back, back before the purchase of my first point-and-shoot.... Then it hit me. I saw a picture of the interior of the apartment before the makeover. That was it. There was junk everywhere, books piled up on the floor... Suddenly, a wave of memory and recognition washed over me, one after the other.

Bertolt Brecht and Stephen Crane were gone for good (...)