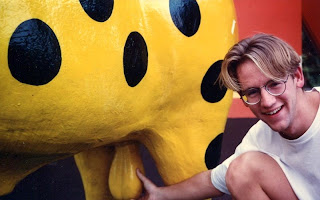 For those who don't already know: in men, the scrotum is located between the penis and the anus and is homologous to the labia majora in women (ie, the larger, outer pussy lips, not the softer ones found inside, even though those can also be quite large, sometimes even larger than the other ones, to their owner's occasional shame or pride, depending). The scrotum, or "ball sack" in latin, holds the male testicles. Its primary purpose is to keep the testes slightly cooler than the rest of the body. Though also able to contract to keep the testes warm, as needed, or for when they're sleeping.

My friend Mike, pictured above, has always had an abiding fascination with scrotum, even those of a cement bovine sculpture. He once had to get an operation on his and when it was over he showed me the testicular damage. It was a b-movie monstrosity. He was having some "un-spoken about" problems. I strongly suspect he had a deviated septum from extensive self-abuse and they finally had to replace his tunica vaginalis* with organic soy milk. His sack was enormous, swollen, black and purple. It was hideous. It looked like a hobo's liver that had crawled from a fetid swamp, in need of an immediate lancing. Though he assured me as I was preparing the needle that this course of action would not help, that it might even have unpredictable and negative consequences.

It looked as if those medical hobgoblins had operated on him with with a rubber mallet, though he claimed it was all a grand success.

After that trauma he developed a lifelong fascination with the testicles and the sack that holds them. But he's my buddy and I don't care. For him to have found this sculpture, in which he could freely admire the contours of the dual-chambered wonder, must have been a windfall opportunity. Note the tender way in which he cups the left testicle. Note the joy in his eyes, the smiling countenance.

The picture was sent by a mutual friend. He was concerned. He had found this image on a private, subscription based internet site and wondered about it. He emailed me to see if I knew anything, knowing that I occasionally have specialized knowledge in this regard. I advised that, as with so many forms of deviant behavior, you just have to turn your head, ignore it, and let it runs its course. Time is the only known cure, if at all. The term that the American Psychiatric Association prefers is bloodhounds enthusiasticus. It is a milder form of the ailment "utter nut-love", which is documented as an incurable obsession. The Emperor Gaius Julius Caesar Augustus Germanicus was its first confirmed victim, which coincidentally is my middle-name, though in its hyphenated form: Emperor-Gaius-Julius-Caesar-Augustus-Germanicus.

It's a family name.

* That's right, one gift that women give to all male children during the gestation period is part of their vagina, it is called the tunica vaginalis. It encases the testes beginning around the 12th week of development, just as they begin to drop.

So, whenever you hear a man saying something like, "She's got my dick in a jar." or "She likes to keep my cock in her handbag." well, it is actually far worse than you have imagined. Your testes spend their entire lives floating in your mother's vagina juice. It is how they maintain their strange magical power over us.

Once I discovered this incontrovertible scientific fact, shortly after dropping out of high school, I had all of mine removed with a shop vac and replaced with an elixir of tabasco sauce, sea salt, lime juice, a teriyaki rub, and the popular Mexican beer Negra Modelo, making my nugget-pouch a portable michelada. This reputed hangover cure seemed the sensible replacement fluid, and has served me well thus far.