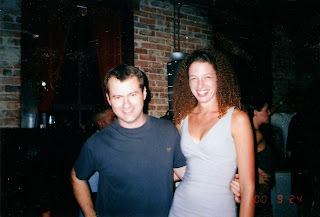 Yesterday's post was a joke. The science was impeccable, of course, as always. But all else, well... it was a special request from an old friend. Both the requester and the subject were quite pleased with it, each reportedly laughing out loud at work. I think that for my nut-hugger friend he was happy to just be talking about his condition openly again. He is a dentist, so his nut sack probably only comes up in conversation naturally on occasion, just as a patient is drifting off under the gas, etc.

Another friend told me yesterday that I write often about being fat.

Well, it consumes me.

She sent a picture of us when we were both much younger and thinner, to torture me. I told her that youth is a cruel stratagem, one employed almost exclusively on the aging.

As for recurring subjects written here: It is difficult. I wake each day and try to sit down and write, rarely ever planning or knowing what I will write about, often with a child seeking my attention, or insisting upon my energies being elsewhere. You try it... After several years it becomes difficult, particularly when there is very little of significance occurring in your life. I mean, it is all significant, but it resembles the previous day, and the one before that, and on and on.

I'll take requests. Honestly. If there is something that you'd like me to write about, then just say so. I'll become the blogging equivalent of a jukebox.

Yet another old friend (I am getting to the age where that is all that I have) sent me a link yesterday morning. This was a story, and a name, that sounded vaguely familiar but I hadn't read much about it/her. I sat up in bed yesterday before the sun rose and read a few sites, with each I became more shocked and engrossed.

Henrietta Lacks. She died in 1951 from cancer. Cells that were taken out of her were used to form what is known as an immortalized cell line. The cells, through mutation, continue to divide in vitro, creating an important opportunity for cellular biologists and biochemists to research. These cells were used by Dr. Jonas Salk to study the polio vaccine, in addition to other studies on AIDS, the parvo virus, radiation, toxicity, etc.. There are about 300 papers written each month that concern the use of the HeLa cell line.

The dilemma, for a few, is that these genes were taken and used without her knowledge or permission, while she was alive. Her and her family received no compensation whatsoever for this. They only found out about it because researchers were harassing them, trying to get cell samples from them also.

You've probably already figured out the next part: she was black.

There are so many that are willing and eager to assist science in its various pursuits. A common secular sacrifice being the claimed "donation of one's body to science" once the breath has fled. The advancement of scientific research, for some, being similar to that of a crusade. What, many might ask, could be more important for all of society? The infidel of sickness must be banished from the holy land, the temple. No moral consideration should stand in the way of saving lives, or so goes the argument.

Most people are not aware that their genetic code, or as many isolated gene sequences as have been found to be useful in research and development, are already privately owned and protected by patents. The stuff that makes you you, and your children your children, all of us all of us, our genetic sequences, are privately owned by a handful of various groups who have claimed the patents.

There seems to be a disconnect between the fight for the rights of individuals and that of groups. The human race seems wholly unrepresented in a legal sense.

This mainly unquestioned biopiracy trucks right along while most seem more concerned with shutting down Monsanto offices, convinced that they have discovered the greatest source of potential corporate evil in our world. An important concern, to be sure, but little matter that the food you eat is wholly owned by a corporation when so are you, or soon will be.

There is big money in owning people. It would only appear evil if they asked us to work for our lives.