The tamer of wild creatures 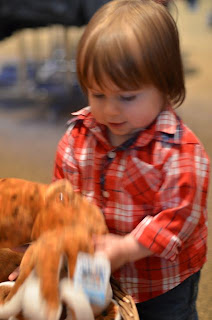 Another weekend conquered. For Rachel's birthday we took Rhys to the aquarium at the piers, Fisherman's Wharf. He was as interested in exit signs and baby strollers as he was in aquatic life, and there was much of each to go around. It was quite fun to watch him pick out a stuffed octopus for his immediate playing pleasure. We kept trying to direct his attention to sharks swimming over head or little rays that can be petted in a pool surrounded by other kids. He's too young to really care, though he sure seemed to like the stuffed toy area. Now, he's the proud owner of a soft cephalopod mollusc with four pairs of fluffy arms. He was wearing it on his head when he fell asleep in the car.

Barkley, the pup, is already eyeing the mysterious aquatic beast.

Later that night we ate shrimp and clams and mussels, with white and red wine. It was our victory over Poseidon, celebrated with a chocolate cake and birthday singing. Rhys and his little buddy played and screamed and screamed and cried and screamed and played. The beginning signs of competitive behavior seem to be appearing. It is a little saddening. One wishes it could be stopped, or held off for a while, but it is a thing that can not be easily diverted, only hopefully contained, with practice and dedication.

Through maternal magic and sorcery Rachel has figured out a way to get little Rhys to sleep past 6am. She's a natural. We watched an entire episode of tv together last night. House of Cards. 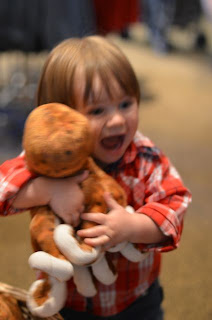