A mistake in usage 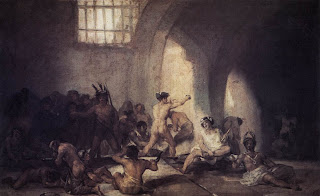 Nobody seems to believe what they claim to believe; it's as if they are incapable.

Last night I dreamed of vile crime. The accounting of the tale was jumbled and barely coherent, adding to its disturbing effect. There was a main character. He had been suspected of having committed a few stabbings. He spoke of Jack the Ripper and the deeply personal nature of such a thing. How much evidence is left, forensics, how close the perpetrator must get to the victims, to become one. There were visions of blades and blood. The memories of faces at the precise moment when the faces become memories and nothing more. To own that moment, he emphasized, A thing that can not be taken away.

Pages turned carefully from an old book, descriptions. We walked freely through an abandoned building with high arches. He explained that all of the people there used to be writers, those who had used precise language. He misdescribed them as "exacting," though with a wryness in the telling. It was carnivalesque, and well past midnight. The faces appeared as nearly bodiless apparitions drawn forth to witness our passing in an open asylum. Smiles emerged from the shadows and became sinister; starless laugher, the bulging or lost dark eyes of the deeply troubled, howls off in the distance, summoning. A hideous woman hobbled her way to us, she appeared as a transvestite trapped in a madhouse. Her makeup was twisted and ill-applied. Her face grew in size until it occupied the entire dream, just red lipstick smiles and pupils taunting, melting from one into another as they spun.

I awoke with a start, surprised that I had caught a character in my dream having made a mistake in usage, wondering what such a thing might indicate. Nothing good, I told myself.

NyQuil truly is a wonder drug. I don't imagine they recommend it for daily usage. I am afraid to read the warning on the side. I fear that it might relay nothing of true consequence, it would create a daily monster. The feeling of morning sluggishness must come with a price. My mind forces strange dreams on me, only trying to get me to wake, after many hours of beloved lethargy. But no visions of that dark nature come freely. It's as Nietzsche said: When you peer into the darkness, the darkness also peers into you.

The idea of drinking coffee in the morning used to disgust me.

"... nothing contributes so much to tranquilize the mind as a steady purpose..." - Mary Shelley, Frankenstein