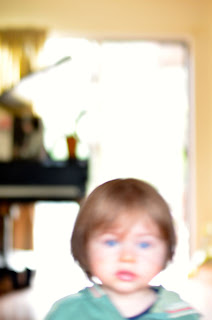 I woke up and read yesterday's post, and I liked it. I seem to be happiest when being a contrarian, particularly when I am depressed. It gives me something to fight through, I guess - a sense of engagement. I don't sit and wonder what to write about. I simply find something or someone to disagree with and then I am off and running. Ah, freedoms....

Yesterday Rachel had a meeting to attend in the evening. I was tasked with putting little Rhys to sleep. It was much easier than I thought it would be. I just found toys and books to occupy him with until he started walking wobbly and diving into pillows, half-slumbered like a miniature drunk. Then, I put him in his crib and Ssshhh'd him a little, and he was off, to the sounds of Music for 18 Musicians.

How simple, I thought, with minimal effort...

But then I went downstairs to read, keeping the radio baby monitor on, listening for awakenings, dissatisfaction. None came.

It was like being in an Edgar Allan Poe story. Every little sound became a possible danger. Silence stretched out and yawned before me. I couldn't read. Why was he so quiet, how? Was he alright? Fuck, please don't let anything go wrong while I am watching him.

I didn't re-enter the room to check, not wanting to wake him if he's sleeping so perfectly, but I couldn't relax. I sat in the kitchen, listening to the monitor, staring at it, waiting for any indication that he was alright.

I laid down, downstairs and tried to relax. Rachel came home and asked how everything had been.  Fine, fine good, I said. She didn't seem worried. But how?

I went to sleep but couldn't sleep, I had only made it to bed. It had unnerved me, sent me spiraling.

What the fuck? I thought. How can this be? Everything went well.

There is no solace. It is why the distant moon stirs and drives some as a celestial speedometer.

If things go perfectly in the film of your life then the bus is about to kill a pedestrian, possibly you. Everybody knows this. Never go to lunch and laugh with old friends. When they cut to the exterior scene you're about to walk into traffic, looking backwards as you smilingly wave goodbye. 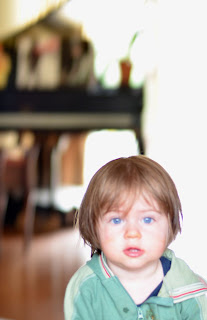