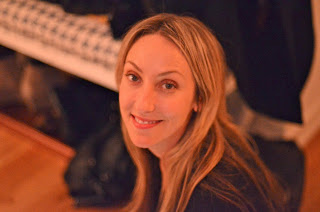 Christmas came and went without much trouble.  It was not the same as the other years: like passing a santa-sized kidney stone.  No baby yet, so we still patiently await its arrival.  Some days less patiently than others. I didn't take any pictures this year.  Christmas is a different experience when I'm not walking around taking pictures of everybody.  I just sat and chatted.  As the afternoon/evening transitioned I started talking about politics with a table full of strangers. Not sure why I did that. But nothing went terribly wrong with it, I think.  I do remember getting a blank stare or two, perhaps that helped quiet me.
I sent a camera in to get fixed a few months ago.  It was the little DMC-LX3, not the Nikon D7000. After about 2 months of waiting for it to be sent back and monitoring the status of the repair they finally sent it back, but to the billing address rather than the shipping address. I checked the tracking numbers. It had been left on a front door step in NYC. I called the repair place, they apologized, launched a full scale investigation, which lasted another two weeks, Then they finally conceded defeat and offered to buy me a new camera.  I discussed options with them as the camera that they lost was not the most current model and that I'd prefer the newer model, if possible. They seemed to agree.
So I might be getting a brand new camera in a couple weeks.  I've been without a small point-and-shoot for months now, which has affected the amount of material I have for the blog.  I don't always feel like bringing the Nikon to work with me. There isn't very much to shoot at work, or on my lunch break, but there is lots to look at on the way there and back, which would be perfect for the smaller camera, which takes great wide angle pictures anyway, with an approx. 24mm wide setting.  So, hold out dear readers... soon we will be back up and running with my cataloging of the western territories.
I called Selavy on Christmas and begged him to give his life over to Jesus before it's too late.  He said he was like Paul McCartney, which I think means "Yes," though I left the conversation without really being sure.  I'm getting tired of partying for his soul. Oops: praying for his soul.  I know I shouldn't admit that, but I'm not Job and it's not a mere 200 years after creation. Times have changed.  I worry about his sinful ways.  We all have our cross to bear, I guess.
He says that I remind him of John Lennon, Iggy Pop and Keith Richards all combined into one rock-and-roll star, but with the physique of an early Brando.
I think he had been drinking.
.
Posted by Sean Q6 at 10:13 AM