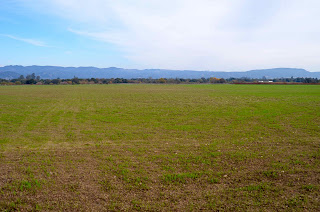 (3 days later)
Again, all night I had post-apocalyptic dreams.  A violent world where guns and knives ruled, rape and killing was the norm, all strangers entered the dream as vicious, misshapen thugs.  I had locked myself up in the second story of a house with others that only wanted to survive with as little killing as possible, but my mind generated degenerates at a persistent rate.  Awful, hideous apparitions appearing from the shape of every structure, every shadow, every fear.  They all seemed intent on intruding, of doing terrible harm.
It was just like having a job.
Other people's dreams are boring.  Yesterday's relaying of a night-flight, magic cat box journey to The Nile was a fabrication.  It was meant to make light of feline mysticism and the out-of-your-body's-brain meditation experience.
----------
I have tried to explain that the land here, the surface of the land, changes very quickly.  I wasn't sure how to elucidate it as thoroughly and as well as it was actually occurring.  Statement becomes over-statement, or it seems to.  But then I was driving by a field that I had taken a picture of only 3 days before and instead of the dirt that it had been covered with there was already a fresh layer of green grass beginning to overtake it.  The field was rather close to our apartment so I turned around and got the same camera that I had shot it with before.
The results are, clearly, above and below.
"The greatest bullfighter is the sun." - Pablo Picasso 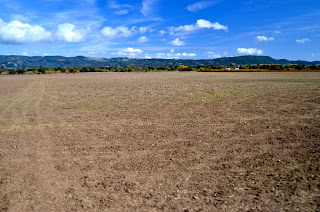