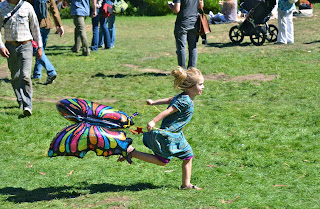 Yes, I've decided once again that I'm going to change the direction of this site. I'm going to transition to writing only children's stories.  Single syllable hyper-events, locked away in binary, somewhere in the grand cloud that is the worldwide Infobahn.  Certainly I will seem like a god then.  It is my will.  So be it.
Perhaps I truly am a believer.  Not an atheist, but instead only a-selftheist.
No.  I'm just afraid of having children.  God must have also felt this way, knowing what was going to happen to poor old Christedeliajesusavior-faire.
There are always a number of unseen components involved in my irrational fears, but the loss of freedom is likely the main one that matters now, I suspect.  Lots of people tell me that it's "all worth it" but when I carefully consider their lives it doesn't seem to me that they really made much of a sacrifice in that regard.  All they had ever done before was work to pay bills. It must give them some sense of relief to feel suddenly meaningful in dong so.
Most people lack imagination, I am cursed with it.  I've never liked working to pay bills.  I've never liked bills. I've never liked working.  Combine the two nasty concepts and it feels like the fiscal inferno, the eternal pit of pittance.  I can see some deepish satisfaction that others get out of it, but I'm amazed at how this could actually be. I worry that I'll just feel trapped, I already do.  The expectations will never cease and yet instead always somehow increase, never by my own choice.  Never by my own doing.
This is not just my imagination speaking.  It's what I see all around me.  Men with that stupid look of happiness on their faces because their bodies produce sperm and allegedly one of them, or more, has inadvertently, against many odds, grown into babyzilla proportions.

If you watch old godzilla films and recognize and understand that the set you see on screen was not actually Tokyo, but miniature replications, shot on a sound stage... then, just watch a child once it can stumble through a living room and you will see what I mean here.  Godzilla had Mothra.  Just let a child loose in a daycare setting and watch the mayhem.

Men are designed to recognize terror, sometimes to create it.  It is science.  Women are designed to be aghast at terror.  That is also sound science.  It is proven, politically.  That's precisely why I continue to maintain that George Bush is not even a eunuch, but  a sexless AND genderless creature secretly formed in the radioactive tubes of Desetron.  Our only hope with Barack Obama is that he shows a little less audacity this time around.  His hope is starting to terrorize me.
I only feign terror here. I am mostly hopeful, though not B.O.'s kind.

I am as much in apprehensive expectation as any other feeling, but my nerves are finely attuned to the sudden sense of danger, like a gazelle, or a cobra.  I'm like a Cobrazelle.  I often adopt a karate pose when Rachel walks towards me now, for protection.....
Then one day, hopefully, I'll see my child happily running through a park with a balloon. Will it all seem worth it then?  One can only hope so.  Only.

I love Rachel, I love our dog, Barkley.  Now I will have another creature to love also.  But what if they have a really bad personality, or they whine a lot, or cry, or want me to look at their bad art.  What if they're not very good conversationalists.  What if I simply don't like them.  Or worse,what if they don't like me, and they prefer playing poker online.  I've never been very good with obligatory love.

Luckily for me others are much better at it than I.
I have been quite blessed with the obliging love of others.

Is it possible to just "pay it backwards" and then call this whole emotional time-warp credit crisis even...?
Do you see how much life energy this unknown, barely seen baby is already stealing from me?  I think I'm going to have it arrested, first and foremost.

Tough love, etc.  Send it to The Hague for crimes in the universal mind, the om womb.
No, I am just howling some fears here and there to the stars.

Everybody is so happy for me that it leaves me a little bit in fear of it all.
The matrix of the human heart is long locked, often only unlatched by others, and much more easily that we might have guessed.

It is the fear and wish of most creatures: somebody, perfectly free me from me.
Below is the little child, barely over two months ago, just lazing around inside the womb, sleeping, not even aware yet of what a titty is.

Soon, my little child, soon....
He/she seems like a nice enough little guy/gal.  Who knows... maybe we'll get along great and it'll be the most delightful thing I've ever decided to do.  I'll take a disproportionate amount of credit for the act, of course.

Perhaps I'll be screaming from the rooftops at what an unbounded joy fatherhood is.  I'll walk into work afterwards with my head held high, shirt without wrinkles, looking younger, stronger, more able, proud to be a solid contributor, a donor of my talents...  Always doing my part, gladly paying taxes, reading the news.  In fact, I'll look at each and every virtual paystub and kiss the screen of missing money; both Federal, State, and Local...praising Allah for the gift of industry, and God the pain of childbirth.

Everybody will smile and ask what happened?  You never hang out any more.... 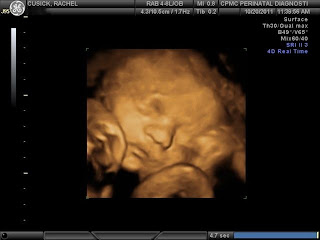 I'll just say, "You guys never drink at the womb. The beer they have on tap there is simply amniotic."