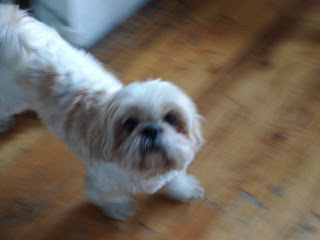 Our dog, Barkley, is losing his ability to socialize.  Since moving from New York he has lost his "social network." I noticed this yesterday at the dog park here, a place that we bring him to less and less, as we are able to walk him with greater regularity at home now.  In New York we would often bring him to the dog park so that he would have some time to run and play with other dogs.
Shih Tzu's are susceptible to developing anti-social behavior, they are known for it.  Yesterday at the dog park a puppy wanted to play with Barkley. Before, he would have played and have been quite evidently happy to do so.  This time he was stand-offish and even began to aggressively growl and bark in frustration at the puppy that was trying to get him to play.  Rachel wanted to beat the dog mercilessly to curb this behavior but I talked her out of it.  The image of a woman, 10 months pregnant, openly beating a poor beast at the dog park was too much for me.
No, that's not what happened at all.  We discussed it like New Yorker's do.  We decided to do some research on the matter. To consult a therapist.
No, again, I kid.
I'm trying to fictionalize less lately.  This past week I fictionalized a few things hoping to get a response from two readers who prefer to have these posts arrive directly in their email inboxes than having to click on a link to enjoy them.  But I got no response, so I'll give up, for now.  I have an extremely compulsive personality, so I'll come back to it. I am certain of it.
We did, however, notice that the dog needs more time around other dogs, that he's getting a little bit feisty. Corporeal punishment was not the answer.
Speaking of, I used to get the living skittles beat out of me as a child in the public school system.  An old friend of mine and I were discussing it.  He was relaying a story to me that brought him much pleasure concerning my response to a particular teacher.  He suggested that I tell the story here, but it is too awful.  When they say that, "Kids say the darndest things" well, this time they're quite right.
She used to make us hold the palm of our hand out to her, then she would grab us by the wrist and spank our open hands with a metal ruler.  If we pulled away, a natural response that any animal exhibits to danger, then we would get extra licks.  If you've never had your palm spanked with a metal ruler then you have not lived. The thought of it still makes me curl my hand into a fist.  Perhaps one day I'll relay the story in full.  I responded wildly to her abuse one day, a moment that lives in grand infamy with my friend, Bobby.
I used to get spanked thoroughly and often in school.  I remember fighting back the tears, the memory of the paddle hanging there in the principal's office, the fear, the shame, the gasping for air afterwards.  I used to have visions of hurting the principal.  I mean, really hurting him. I wished for his death.  I still do.  He was a sadistic creep who apparently was hired to alone perform this one barbaric task.  He was likely rewarded with full retirement benefits. His ability to brutalize children being praised under the banner title of "esteemed disciplinarian." It was all I remember him doing.  That, or the fear of him prowling the hallways, as a vacuum of righteousness.
There was always a stream of children waiting to get called into his office where, after a short talk, you were told to put your hands on the desk and he would then distribute justice evenly across your butt cheeks. Unless, of course, when he missed and hit your upper legs where it would result in bruises instead of the usual pink flesh tenderized by terror and wood.  The outer waiting room was akin to a death row for children.
The sounds of the other children getting spanked coming through the door was almost, and I emphasize the word almost here, as bad as the actual hits you would receive, for your crimes. You could always tell the children that were also spanked at home, they rarely yelled out or cried afterwards.  Miniature stoics were we.  When it was your turn and you were in place, legs apart, hands on the desk, then the sense of the paddle swinging through the air towards you would remove all sound, all the air, even all known things from the entire universe, for one brief split second.  All of that would end with a crack and then your entire attention would suddenly be very focused on one area:  the gun rack at K-mart.
This cruel fucker would usually say something before the licks would come. Something like, "Now I hope this serves to remind you the next time you feel like disrupting class."
I believe the punishment was elective. Parents had to sign off on their approval or disapproval.  My mom was quite liberal in this regard. She distributed leaflets in our neighborhood instructing other parents to beat me, and how, when they deemed it necessary.  No, I kid, but almost...  She eventually did a 180 degree turn on corporeal punishment in schools but it was well after I had made it through, slightly bruised and then suddenly angry.

When I tell Rachel about these experiences she is mortified. She went to school after they had done away with this particular form of correction.  It became illegal for anybody to touch or harm a child, though the practice seems to have just gone underground, sort of.  A society does not easily do away with a custom that brings so much joy to its wardens of education.  How some of them must really long for the good old days, their biceps swelling with pride.
I guess I slipped in just under the wire in terms of age. Lucky me.  I think of the horrible future fate that awaited me without that intense physical punishment and I tremble at the thought.  I might have ended up as a ne'er do well of some sort, a wandering tramp, a hobo on the skids.  But with the swift plank of guidance I was kept from that cruel destiny.

I quit school shortly after I turned 16.  I'd like to say that I "never looked back" but I just did.  Somehow there's still a paddle swinging towards me, the demented grin of order still wielding it.
.
Posted by Sean Q6 at 9:59 AM