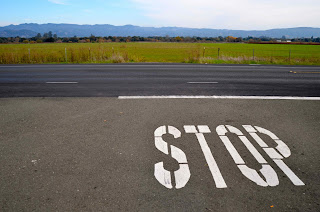 Well, yesterday I hit 500 posts for this site.  I have very little control over what I'm going to write about each day.  I try to pick a subject but often wrestle with focus.  Most days I wake up, write my post, then go back to sleep if I have time to before work.  Sometimes I will read it when I get to work and am mortified at the glaring errors, sometimes I will spend precious company time correcting some of the more painful mistakes, other times I have to let them go.  Still, at other times I've written rushed posts while at work and they have turned out okay, I think.  I hope my employers would be proud as they fired me for such a thing.  I was once accused of spatting, "Bullshit!" at Selavy when he claimed that he does not ever go back and edit or correct.  Now, after a year of casual reading, I believe him.  My problem is that sometimes it's much worse after I've corrected it than it was before.

What are we to think of such things?


Well, the long arm of the law has finally caught up with me.... Last night I got a speeding ticket.  I had rushed out the door yesterday morning, changing pants at the last second because my wife suspected that I might have shit myself.  Having no time to squabble over the differences between being disgusting and actually having pooped oneself I simply changed pants and rushed off to work, leaving my credit cards, cash and driver's license in the allegedly soiled pair that remained on the bathroom floor, awaiting the maid's gentle service.

When Rachel and I moved to California I thought it would be fun to study for and then take our driving test together so that we would have a comparative basis from which to complain, or not to complain, about the presumed merits of our abilities, or likewise our verifiable defeat from which we must concede the other's victory.... No, not really, but I did encourage us to get our licenses changed to ones issued by California and it met with the simple question, why?  Or, why rush?

Well, that gets explained a little further along here.

The actual license plate that we unexpectedly had to pay around $600 for upon our arrival on these fair shores came in duplicate, one for the front of my car and one for the back.  We did the same for her car also.  Yes, we're Americans, we own two cars, we'd own three if we could find somewhere to park the third.   I was pleased with the two pieces of aluminum alloy made specifically for me, painted with numbers and designs, and unlike any other numbers on any other California license plate. The system seemed quite sensible at the time.  I forthrightly attached one to the back of the car and tossed the other in the back seat of the car where it still remains, protected from the elements, and awaiting the proper frame by which it can be attached to the front of the car.

All of these factors on their own had little affect on me.  But as soon as a police car last night pulled up behind me in the "fast lane," which I was later to find out is only the "HOV" lane (High Occupancy Vehicle), and not what is truly known as a "Fast Lane."  That term, in fact, brings an immediate heightened emotional response from most any California Highway Patrolman, a CHiP, as they're known.  The term "Fast Lane" is a colloquialism that they uniformly resist.  Now I know...  As I was saying, all of these disparate factors on their own had little or no influence over my daily life, up until the sirens and lights turned on me suddenly from behind.  Then it all becomes very clear, each indiscriminate detail falls into place, one after the other.... Oh, painfully clear, as the seemingly disconnected events and details coalesce into a suddenly meaningful conspiracy against the driver: me.

I was doing 90 in a 55 zone.  But that's not why he pulled me over.  He clocked me doing 80 in a 55 zone. Luck was starting to favor me.  They say that, luck favors the prepared.  If that's true then one can only imagine how much more luck must favor the hurried, the rushed, the babbling frantics of the world.  We were about to find out.  I texted my wife that I was probably going to jail, made a quick screen shot of my location, texted it to her, awaited my fate.  I began to think about possible states that I might have bench warrants out for my arrest, making a mental not to mention West Virginia in any of our upcoming conversation, and maybe even Florida.  I began to question whether I should even admit to having a New York State driver's license, but the alternative was non-existent.  Perhaps now would be a good time to deny that I was even the one he pulled over.

It began to dawn on me right away that this guy was not out to get me, as he easily could have been.  He was pretty easy going, practically a drinking buddy.  He didn't even seem to flinch that I was doing 25 miles an hour over the speed limit, without identification, at night, in a yellow hippie rickshaw, now missing  a hubcap on the front left wheel.  The several emergency Xanax and various other pharmaceuticals that I keep in the dash started to worry me a bit, but I focused on not accidentally blurting out anything about West Virginia.  I was a razor of anti-incarceration focus and attention to detail.  I just kept a cool look at him, breathing lightly through my nose, nodding in complicit agreement.

He seemed quite pleased to take my registration, proof of insurance, and unverified verbally transmitted birthdate back to his flashing car with him.  He busied himself for a few minutes while I did the same.  I texted the wife again, letting her know that he had only clocked me at 80, what a freakin' slouch, right?  They pay these people...?  She seemed worried about the possibility of an overnight stay in jail.  He returned sooner than I had even hoped and found me busied with distressed digital communications of all kinds.  I smiled inquiringly and put my arm on the car door to project a sense of calmness and well-being, warmth even.  I channeled the old meditating woman from a few days ago.   My face was a relaxed Toltec mask of emotionless centeredness.

He said the most unexpected thing a police officer has ever said to me, paraphrased here:  Well, I clocked you doing 80 but I noticed you slowed down on the turns a bit, so I'm only going to write you a ticket for doing 80 in a 65, rather than a 55.  That'll take it down from being a more serious offense to a reasonably minor ticket.  I just need you to sign in the red box there.

As old H.S.T. once said: I gave him a fine, big smile, admiring the shape of his skull.

And that was pretty much that, until I got home.  Wives are funny creatures.  She seemed genuinely on my side when I was going to jail.  By the time I got home she had time to Romney her position a little bit and had built herself up into a simmering scold.

No, I kid a bit about that too. She was proud of me. I could see the pride bubbling up in her, could hear it in her voice.  I was amazed at how much restraint she expressed in her desire to overwhelm me with praise and commendations.  Her admiration for me was palpable.


Now, tomorrow I'll tell you how much the ticket was for and we'll further examine the state of California's fiscal crisis and the effect it has on the nearly law-abiding working-man.....