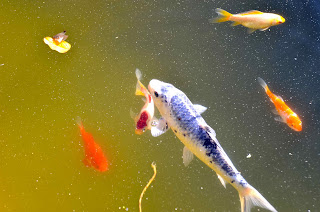 What the fuck am I talking about?  I woke up and re-read my post from yesterday.  If I read it the way that I think that I meant to write it then I compared Jack London to Sarah Palin....  Or even worse, I compared Sarah Palin to Jack London.  There really is no comparison.  Jack London was literate, for one.  Jack London's works are remembered and revered 100 years after he wrote them...  He was a socialist, she is a medialista.

No wait, I just did some research It turns out that she published a book, it's called, "Going Rouge."   An autobiography is when you sit down with a make-up artist, tell them how you want your story to be told, it gets published after several editors have made agreed-upon changes, then it automatically appears on bookshelves with your name on the cover as the author.  An autobiography it's called, but it does qualify her for entry-level literacy, I believe.
It has outsold anything that Jack London ever wrote, let the records reflect. Who would have ever guessed that old Sarah Polin' would whip his ass at anything.  Turns out that dreams really do come true, in America.
Well, everybody makes mistakes, that's mine from yesterday.  Moving on....
Last night I made a new drink.  If a martini is basically a "double," as I've been told that it is, then a tripletini needs no explanation, nor does a quatrini, but my magnum opus... my coup de grace as well as my saving grace, is the mighty pentatini.... that's right, 5 shots of gin (not vodka), vermouth, lemon slice, some ice, a glass... well, you know the rest.  I created it late last night and had it nearly perfected by morning.
It was building on my famed metamuciltini, an orange-flavored-tini, for elders.  I was still struggling with sediment buildup at the bottom of those and hadn't got it all quite figured out.  It's almost as if I need a glass in the exact opposite shape of a traditional martini glass, but more on that later, there are patents pending, etc.
E.B. White once called the martini, "the elixir of quietude."  The pentatini is the exact mathematical and spiritual opposite, it is rather the philter of fortitude.... I think.  I wasn't able to conduct all of the needed tests on it before a groggy sleep overtook me, impeding my progress, and stamina, as it were.
No, I only kid about that too.  As we get down to the wire here we must run a pretty tight ship, there is precious little room on board for error... and the soul, the very essence, of a pentatini is just that: delicious error.
More on politics, publishing and puking later.
Posted by Sean Q6 at 8:21 AM