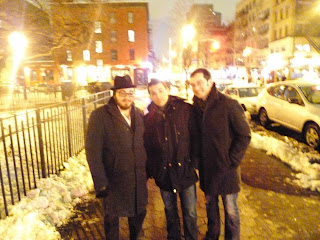 (Shadrach, Meshach and Abednego, Christmas 2010, NYC)
Clearly I was up late drinking with Facebook again last night.  You remember what your parents always told you: Be careful who you choose as friends....

I have so little time to myself.  I end up coming home late from work and relishing the little freedom I get before I go to sleep. I want to make the time nice and special so I'll open a bottle of wine.  I try to avoid calling Facebook to come over and hang out, but by my second glass I've got my finger on auto-dial.  The rest, as they now say, is my timeline...
Now the camera place is backtracking a little bit on exactly what they're going to do for me to replace my lost camera.  It started out with lots of big promises and apologies, now it's devolved into a settlement type strategy. This obviously doesn't help me because I have no money to put into this unexpected fiscal adventure. So I might end up with a meager settlement check and no camera. We'll see... I'll keep you posted, and I'll remind them that I am a famous blogger, one who occasionally gets compared to Elton John, etc.
My friend, Z, gets emailed these posts, hot-off-the-press, as they say in this industry.  So she doesn't get to see any of the corrections or revisals. She asked me who Slavy was last night.  It was her 37th birthday, she was out celebrating.  I tried to get her to slur it properly, to clutch the nuance.  I said it's a play on C'est La Vie, a French phrase approximately meaning Such is Life.  She couldn't seem to grasp it, though it was spinning right there in her martini glass with her, whirlpooling away.  I believe she was having the first of many early-onset menopausal hot flashes.  She is currently a MILF, sliding quickly into Cougar territory.
I tried again, "It's short for Slavia Minora, it's a body part."
She seemed to understand this. She asked if the author of the other site was my old Australian buddy.  I explained that it was.  She insisted that she liked my site much, much more but that perhaps there was something lost in the translation with his.  She wanted to emphasize that point, that she really liked my site more, so that I would understand.  So that I fully grasped precisely what she was saying.  There was precious little room for error here.  It became extremely important that no misunderstanding creep into the conversation on this point.
I wished her a happy 31st birthday and went back to work...
Rachel bought me some dumbbells for Christmas. Never before has an item been more appropriately named. They resist everything that I do. They are 5 pounds lighter than the ones I left in NYC but they feel 5 pounds heavier.  I'm convinced that the manufacturers of these things are using the same type scaled mathematics that Z is when calculating her age.
Okay, I have to get some sleep before returning to work at the differently diamond minds... otherwise I'll have no energy left for Facebook tonight....
C'est Labia...
.
Posted by Sean Q6 at 10:28 AM