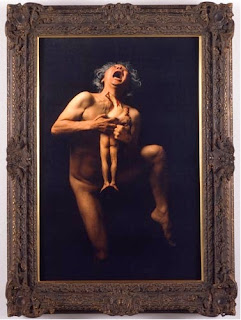 (Artist unknown, re-make of Goya)
I was talking with a friend of mine, 'said a woman had hurt his pride.   No, wait, that's Tom Petty, Richard Petty's brother.  Damn it, I'm already off to a bad start.  Let me try again...
I'm getting old, like Stevie Nicks type old.  I'm starting to blame all of my troubles on Klonopin rather than cocaine.   That's when the trouble starts, assigning blame.  I wrongfully did that for years with whiskey.  I harbored a secret love for it, but then blamed it alone for my behavior, refusing to accept that it wasn't the whiskey's fault...
Where am I going with all of this... I was having breakfast this morning with a pregnant woman and we were discussing Robert Downey Jr. and his many troubles. Both agreeing on his prodigious talents, matched only by his prodigious problems.
I saw an interview with Downey, during the interview he said one of the most insightful and telling things I've ever heard anybody say about drugs and drug use.  He was asked what his favorite drug was.
He paused a beat...
"More."
Precisely, I thought, more, always more.  To anybody who is inclined towards overuse or misuse, or whatever you want to call it, anything can become your drug, not just merely something that is addictive, addictive properties only accelerate the impulse that is already there, and mostly to somebody who has the specific personality type that has the propensity to give in to the impulses.  A close friend once told me that people who do lots of drugs are NOT doing them for pleasure, that there is another reason, but that pleasure was the banner under which they hid their yearnings.
To wit, I don't do drugs much any more.  However, without going into the unnecessary and sordid details, I did for many years.  You would be hard pressed to find a more vocal advocate for hard drug use, sustained drug use, as well as general pride in drug misuse and overuse. It was my badge of honor for about two decades.  I was what is known in that community as "a seeker."  It becomes more and more evident to me the further I get away from that congregation of people, though by saying this in no way am I assigning blame or fault to them, it has only become a more easily recognized pattern from a distance.
In my defense, I offer a fiction of sorts:
I went into San Francisco one night, to go out to a nightclub.  Some friends made the mistake of handing me a film canister filled with drugs.  You can probably guess the rest.  It sent me into an hour long spiral in which I attempted to do as much cocaine as you can possibly do without dying, eschewing all social contact, locked in a bathroom exploring phone pornography options. Well, you might not have guessed that, so that's why I'm telling you.
My heart was racing, throbbing wildly in my chest, I was sweating through all of my clothes.  In short, I was obsessed, I wanted more, much more.  Obsession is a state that I greatly prefer over all others, when in its grip.   Once I am relieved from its clutch, by whatever means: either running out of drugs or running out of money, the guilt of impending responsibilities finally overtaking me, the passing of enough time, drinking myself into submission, eating enough downers, thoughts of getting caught, guilt, whatever... I subside back into my normal personality, pretty much.
When it was all over and the storm had passed I attempted to meet back up with my friends.  I had to take all of the remaining drugs out of the canister, hide them in my shoe and attempt to make it through the front door of a club without raising alarm or suspicion, even though it looked like I was presently midway through a stroke, my eyes darting nervously from side to side, pulsating in their respective sockets, eager to see all things while being seen by none.  Anybody familiar with it knows, the eyes recede into a darkness, reflecting only the presence of private obsessions, never the details.
Like this: 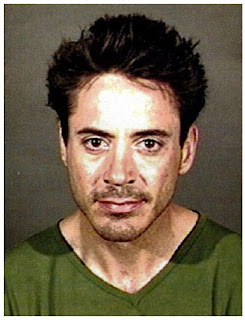 Once inside the club I tried to recover the drugs, there were scant few left and one bag had emptied itself inside of my shoe, I assume.  I really began to worry about how much ketamine could be absorbed through the skin and what effect this might have on me.  I envisioned trips to the hospital with very angry, sober friends.  To make matters worse my friends had the audacity to blame me for the missing drugs....  I was the victim here, not them....  They still haven't apologized.  The interesting and odd thing about obsessions is that once they're over it is quite a normal part of the process to experience a crippling guilt.  This can be as true for food, or sex, or drink, or art, or anything, even watching tv.  Satiating oneself past the point of gluttony has a interesting effect on an individual. There is an arc to the process. The old adage, you always come down, couldn't be more true. You really do.  I did.
So, the lesson for today is that drugs are bad, we should burn all of the drugs, unless they can be ingested some other way, that is.
I'm out of time. I go now to the SF MOMA to gluttonize the art there. There is a photography exhibit that Selavy has tasked me with witnessing. Today's post has been both cautionary and instructive.  I really think I'm getting ready to be a father...
Also, these posts go out immediately by email to one of my good friends and a critical reader.  She never gets to see the 2nd and 3rd drafts where I correct some of the big mistakes. So... keep that in mind, Z.
.
Posted by Sean Q6 at 8:30 AM