I must miss New York already... 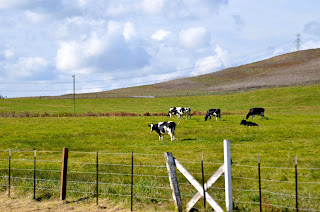 (Eat more hot sauce...)
Nothing much to report today, still exhausted from yesterday's post.  I'm becoming an old man, but very slowly.  I watch tv and I find myself saying things like, "Life wasn't like that when I was younger." and "Things have really changed."  I'm about a year or two away from saying, "This country is going straight to hell."  Stay closely tuned here, it's only a matter of time.
The funny thing about that sentiment is that it is true for all that say it.
It's all true, in fact.  Now, with a wife as pregnant as it is possible to be (36.5 weeks), I'm starting to worry more about the future.   I've got my scientist friend trying to convince me that global warming is a myth, a scam that's being played on the other scientists of the world by Al Gore, which is deeply comforting and precisely what I need to hear right now.  I don't need yet another part of the future to collapse in front of my eyes, or rise in front of my eyes.  I just want the future to return to being place I want to get to.
Denying global warming helps.
Speaking of terribleness... I was eating at Taco Bell the other day, early in the morning, long before the madding crowds.  I know, I get it, it's not health food.  I had ordered the #6: two steak Chalupas prepared "Baja" style.  It is several ingredients afar from being health food.  In fact, it is nearly complete in its embodiment of the definition of junk-food.  Were it not for the tomatoes it would be perfect in that regard.  I'm praying that nobody alerts me to the fact that the tomatoes are somehow radioactive, made of a combination of plastic and lead, sent to Taco Bell daily from a Chinese toy factory.
Please, just let me eat my terrible delusions.
So, as I was sitting there, ingesting these wrapped harbingers of awfulness, this man walks into the Taco Bell, blunders over to the section where the straws, napkins, garbage can, and sauces are, and begins to fill his pockets up.  When I say that he was filling his pockets I am not exaggerating.  He literally stuffed each side pocket, one with hot sauce, one with mild.  He nearly emptied the place out.  Once his hot sauce pocket project was complete he turned and staggered right back out the door he came.
At this angle I got a pretty good look at him and things became a little bit more clear, though probably more for me than for him.  His eyes were marbled with a sort of dirty crimson pattern, streaked across its nearly original yellowish here and there to offset the deeply ingrained damage, buttressing two black holes that very likely used to serve as pupils but which have now expanded to consume whatever was left of the cornea and iris.   He had an overly Downey-esque look about him.  I focused on the wonders of industrial food production in front of me, trying not to seek a secondary visual verification, trying to think of some sudden way that I might somehow use the food to defend myself, to use its power for good rather than evil, for once.
Clearly this guy was already immune to hot sauce, so that option was out.
But the moment passed as quickly as it could stumble by.  I looked towards the counter and it was business as usual there.  Just another day at the taco factory.  When I was done eating I went to throw away the remains and return my tray to its appropriate spot on the top of the garbage can, from whence it comes so does it return.  There was a young kid standing there at the register.  I informed him that they were running out of sauce. He smiled and told me that the guy comes in about 3 times a week and does exactly the same thing every time.  They've just learned to leave him alone, it's easier that way, he says.
I imagined what a vinegar based diet would eventually do to a person.  I envisioned extreme detox's sweeping the nation, talk shows, book tours, all based on Taco Bell's hot and mild sauce.  Potassium Sorbate enemas, tomato paste facials, all of it.  Perhaps it was the only thing keeping this guy alive, his daily detox sauce. Who knows.  I put about 6 of them in my pocket and headed for the car.  A long day standing at the fantasy factory still awaited me.
.
Posted by Sean Q6 at 9:00 AM