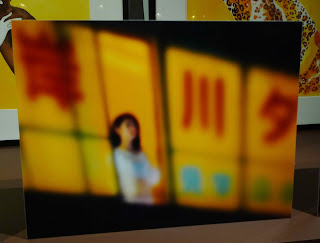 (Soho gallery window)
I opened up the behemoth photo library, the 200GB problematic one, and started looking over shots from the last 12 months.  I think I'm a "shutterbug."  I take pictures of the most useless things. The library is filled with blurry, non-sensical, nothings.
It is useful for me though, to go through pictures of the past.  I have a terrible sense of time and it helps me place things in my memory, in relation to one another, to put them in some semblance of order.  I used to use music for that function. The years were always held in my memory's timeline by what relationship they had to certain albums, when those albums were released, what I was doing at the time, who my friends were, what car I was driving, the girl I was dating, etc.
Now I can usually pick the decade that something happened and possibly even guess at early or late in that decade, but that's about it.  It'll be a quick and easy step to senility from here, hardly noticed.  20 years slipped away from me as if it were one long intoxicated weekend.  My only regret, if it can even be called that, is that I simply did too much for too long.  I would do it all over again though, and gladly.  I suppose that disqualifies me for either regret or remorse. The only lesson that I might have learned from it all was that you can have just as much fun ingesting much less.  There are many that will tell you otherwise. They're only right some of the time, less and less so as the years accrue.
Writing on this site has also helped me store memories in place and time.  I have learned that if I drink while writing it only seems to help while I am still relatively sober.  There is a point that, once I am passed it, I become self-convinced that the writing gets much better, great even!  But I face the difference in the morning.  I see with different eyes, when it is floating there in front of me, illuminated on the screen like an advertisement for moderation.  All of my pleasure from drinking occurs while I can still read and write, after that there is usually only the feeling of silliness when I see it afterwards.  The shame of many mornings.  It is no coincidence that I also struggle to read or write the morning after.
Who knows, maybe I will use events in my child's life to mark the passing of time now.  Whereas most moments before faded into a still or barely moving blur, an out-of-focus postcard from the past, now perhaps life will gain a greater sequential clarity.  I might become a paragon of time, a minister of moment.  You will hear the clock ticking within.  Just put your head to my chest and listen gently for the moving of the hands, the faraway tolling of the hours and years less clear, as from distant church bells beating, not lost, but echoing ever over their own blurred repeating. 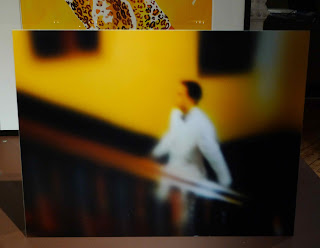