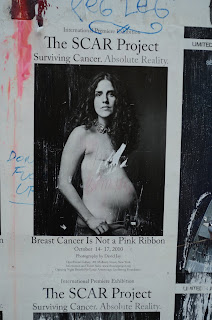 I took the picture above without giving it too much thought.  There were many of them lined up side by side on the construction boards that run along a particular street a few blocks from my house.  Most of the posters had been defaced and I took this picture without really realizing what I was taking a picture of.  I only saw the pregnant woman and I snapped a quick picture of it.  It is not uncommon now for my wife to be several steps ahead of me, sometimes waiting patiently for me, sometimes not, sometimes walking ahead.


When I was young, perhaps 3 or 5 years old, my mother became pregnant.  This would be a little brother or sister for me, I was told.  I remember acknowledging that she was pregnant and that she was where babies came from, her belly.  I remember asking her details about babies and the process, and wondering aloud what the baby would be like, a boy or a girl.

At some point during the pregnancy my brother and I were placed in the care of the neighbor across the street and I was told that my mother was very sick.  I remember having to get ready for school in the unfamiliar surroundings of my neighbor's house, with her kids.  I remember special care being taken with me. The mother from across the street consoling me though I didn't grasp why.  I recall the embarrassment of being nude and taking baths in front of this strange woman, the unfamiliarity of her, the strangeness of her not being my mother.

I'm not sure exactly who it was that began to talk to me about sickness and what it might mean, and that my mother was sick.  But I do remember becoming very scared from not having seen my mother in some time and being talked to about her in this way.  I could detect the level of concern for me had everything to do with her.  I remember extra cookies being packed in my yellow metal lunch box.  I remember going to the empty place of school and being told to not worry about it.

When she came home from the hospital there were many people eager to help my father.  My mother was in her bedroom, mostly alone. I remember strange foods being brought over by neighbors that I hardly knew.  Each night the dinner we ate and each day at school the lunch that I brought was a mystery, filled with unusual foods.  I remember seeing her, and knowing that she was sick, being able to see the weakness in her body.  I could see bandages on her chest when her gown would fall one way or another to reveal the partial result of what had happened to her, the empty spot that used to be her.  I remember finding my father sleeping on the couch some nights when I would wake from fear, wanting desperately to go to the room where I would usually go at those times, wanting the consolation of my mother.  I remember my father not getting mad at this, being patient, gentle, trying in his own way to calm me, but telling me that my mother needed her rest, that it was very important that she get her rest, that she could not be disturbed.

It was not explained to me at the time, but a few years later, that she had lost one of her breasts from the cancer they had found.

The baby brother or sister that I was not going to have required a more immediate explanation.  I remember my mother trying to explain that not every time a woman gets pregnant does it always make a baby, that sometimes God decides that the time is not right, that God makes all of these decisions for us, that we can't always know his plans for us.  I remember being upset about it and not being able to hide the disappointment, but also recognizing the gravity of some other thing, something more important was going on and my mother had a way of letting me know that.  I don't remember any of the details of what she said, but I remember the way that it made me feel.  I remember her emphasizing that she would love me forever.


As I grew up I became ashamed of what had happened to my mother. I knew that she was missing a breast and that it was difficult for her.  In turn it became difficult for me.  I remember being ashamed of my shame, knowing that it was wrong, but being resentful for having to deal with those emotions at all.  The more my mother tried to get me to understand what had happened the more uneasy I became. I see now that she needed me to understand and love her and I was repulsed by it and afraid of what had happened, of what could happen.

Years later my mother became sick again, eventually dying from lung cancer.  The feelings of helplessness that developed in me through those last years have had a lasting effect on me.  A few people have recognized that certain aspects of my personality seem to have developed around the frustration of not being able to help when someone is sick.  I get feelings of intense frustration that have no other immediate cause or explanation.  It is something I have tried to become more conscious of.  Less shame, more life, etc.


Once I had realized what I was seeing in the picture above, that there was more to the image than just the pregnancy of the woman, I went back late at night, after work, to try to find a better poster to get a snapshot of.  They had all been replaced with an advertisement for some series of shows called The Rock and Roll Circus. There were only fragments of the posters visible and in the darkness they were difficult to photograph, the camera seeking focus, the white balance skewed towards the red, many of them were scratched away in full, or in part.

I found one where the scar from the removed breast was visible.  It is somehow exactly as I remember it, impossible and unending. 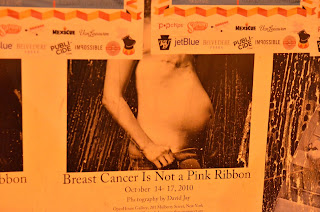