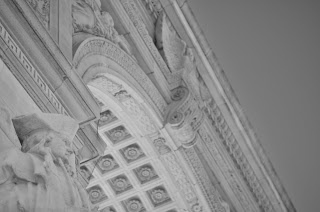 Wow, last night's post has already elicited quite a response.  The post was mostly referencing a conversation I had in a local bar here with a neighbor.  My neighborhood "friend" kept using the term "reverse-racism" and applying it to the observance of MLK day. He then went on to espouse the debunked idea that MLK used to use contribution funds to hire white prostitutes and then beat them up, a complete falsehood.  After that he tended to focus on MLK's communist sympathies and his plagiarism, two established facts about MLK.  No human is perfect and in the effort to advance his cause he apparently did receive funds from communist interests, among other improprieties.  The U.S. government is equally guilty of this sort of thing, though my "friend" had no interest in exploring that line of reasoning.

As far as MLK's plagiarism is concerned, that is an unfortunate fact about the man.  It is well documented and agreed upon that he was found to have plagiarized somewhat extensively while working on his doctoral thesis.  His degree could have been revoked posthumously but it was decided that it would serve no purpose as the man had already passed.  Is this reverse-racism?  Perhaps.  Would they posthumously revoke a degree awarded to a white man based on the same criteria?  I simply don't have the answer to this, though I'm assuming that it would be looked at on a case-by-case basis by the awarding institution.

So, yes, he was imperfect.  I never meant to suggest he was anything otherwise.  These details about his life do not negate his accomplishments however. It only does that in the minds of individuals who would seek to deny his accomplishments with or without those facts.

I had meant to stay away from political issues here, but sometimes you hear the distinct air of resistance to recognizing any of MLK's successes, and it is impossible to hear it for anything other than what it is, veiled racism and bigotry.