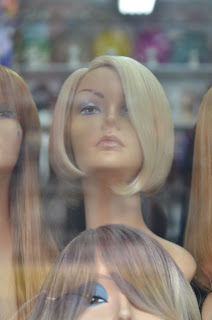 Yesterday I went with a friend to Central Park to practice shooting with a flash.  I love my camera but it is a different device with the flash on, it becomes more intrusive, more obviously a camera, and people notice it and avoid it more. Some will look at it, and me, with a sort of fascination but many seem to look at it as a potential violation of some sort.  It is a difficult thing for me because I am still not confident with myself as a photographer and the flash makes the unit look so large that it makes me self-conscious, especially when the flash goes off.  It's like having the Death Star hanging from my neck, preparing to annihilate planets, and I Darth Vader.

I was experimenting with getting good exposures of objects in the foreground while the sun was setting in the background. The flash gives an unnatural sense to the image, though not so much that it looks bad, it just appears other than what the eye records in these situations.  Or perhaps it is closer to what the eye sees, as I believe the human eye adjusts to backlighting much better than a camera, though I'm not sure about any of it.

Central Park is the place to do this sort of thing though. One woman towards the end of our day there, who was out walking her dogs, asked us where we were from. She was surprised into a giggle when we said The East Village. We were the very image of tourists in the city, backpacks and camera bags, tennis shoes and overblown camera setups. I think my friend might have even had white socks on.

Neither of these three pictures were taken with the flash, but I liked them as I was flipping through the results of yesterday. There is a fading sense in them, the New York of another time.  I had one shot of an elderly woman looking through the window at the wig shop but I couldn't use it, it seemed just a little bit cruel.  I hadn't asked her permission to take the picture and the picture seemed to be giggling at her.

I've walked by this wig shop many times over the years and never stopped to take a picture.  There used to be a record store right near here but it closed many years ago, along with most of the vinyl shops across the city.  I'm doing a live radio show in one of the few remaining ones on the 19th, Halcyon.  I'll post a link here once it's done.

I'll see if I can get anybody a discount on wigs too, just mention that you saw their online advertisement and a sexy new head of hair awaits you... ask for the q6 edition, it looks just like the Phil Collins classic, but much less expensive. 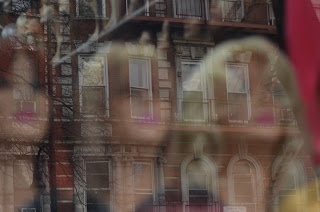 There were many minor stories to relay about the day in the park yesterday but I feel like I've run out of time here for now.  I slept terribly and I'm hoping to go back to sleep soon, wig or not.  A day of drinking beer and walking in the park is exhausting.  I feel brittle and out of sorts, as if my bones were made of condensed wig fibers.  Perhaps another beer will help. 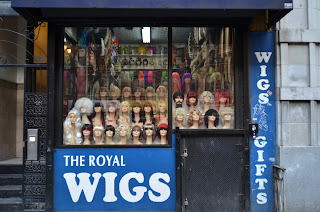 Addendum: After posting this on Facebook my friend suggested some "hair of the wig" as a cure-all... Funny stuff.
Posted by Sean Q6 at 5:00 AM