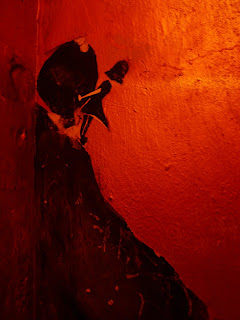 I have seen the image above for many years.  It is in the toilet of a local bar that we frequent.  For several years I saw it only one way: as a young girl trying to move the implacable head of some cloaked, judgmental elder, likely a male, suggestive of a father, or lover.  The precariousness of the position of the skirted girl made me think that the painting was done by a female, though I had no affirmation of this from the owners of the bar.  I never asked.

In time I began to see the image as a gender inversion of the myth of Sisyphus, a young bobbed girl forever pushing the rock up the mountain, only to have it roll over her and repeat the cycle.  The position and seeming weight of the boulder just at the moment that it overtakes her efforts, though she struggles to push the burden daily past the summit once again.

Either reading of the image worked for me, and I was quite pleased with this little painting.  It had been in the bathroom for years, as I said, and had suffered and survived many attacks of vandalism, though it had likely staved off many more by simply being aesthetically pleasing, suspended there.  It has suffered a few scratch marks over the years but the essence of the thing has remained intact. 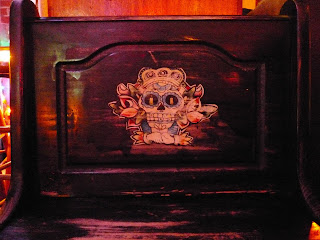 We recently had a visitor from Canada, a comedienne. She saw something, and drew my attention to, a thing that I had long seen but somehow ignored, or never truly noticed.  That the rock was not a rock at all, but two rolled up old women, rotund sisters when combined thusly, trapped in their habits, wandered in from the city of lost children or even eviler distances, and this perpetually struggling young girl on the verge of tossing them over and off the edge of this last crest, forever inverting both the image and idea of heaviness and weight into a nearly blasted balloon... a final verge, a climax of liberation, a zenith femme and her lifted escape from habits. 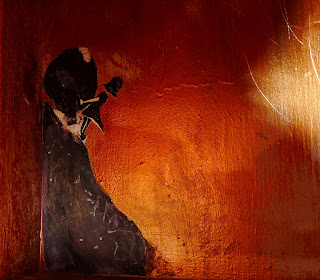