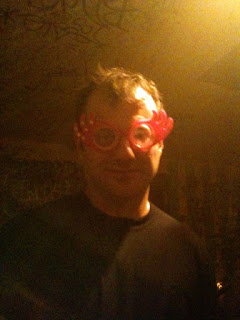 ("The last thing I remember seeing")

Juan Z told me yesterday, the gym is no more. My little local gym, that I've been going to for six years as if it were my own, would shut its doors for good at closing last night. The fucker owes me $35 for my last month's membership fees, already paid, but I'll probably let him slide on it, as I've done with most of the wayward transactions that have occurred between us. When he moved locations he tried to tell me that the year I paid in advance of gym fees was no more. He said that they're starting over and all the old deals were over. I said, Sure, I understand. Just let me look at your new business license and we'll be good. He explained his license was the same as before, but he was a new man. I reminded him that my pre-paid membership was the same as before also, then. We negotiated. He's a good guy and I like him, so I let things go.

A relationship is measured in what it's worth to you, not in what it costs you. We'll get around to that here in a minute. It's a paraphrasing of Nietzsche.

Ah well, things do change, as we are always reminded at inconvenient times. Today I will go to one of the "fancy" gyms in town and try to negotiate a single month membership without paying a sign-up fee. I'll tell them earnestly that I promise to never use the showers for anything illegal, ever.

Why do gyms have sign-up fees? Is it customary to pay someone to do business with them? I've never quite understood that type of charge, but I'm getting older, so I try to choose my battles more carefully. What would happen if they didn't charge the fee? More people might sign up for single month of use, not use it, then quit? So what? Is it a strain on the personnel or the limited resources? Or, is it like a cancellation fee charged in advance? If gyms had no signup fees but steep, hidden cancellation fees then they'd make more money with the same bullshit business model. They are one of the the most overpriced and least consumer friendly models in the market. It's why these "super gyms" emerge, beating the competition is relatively easy. Any spud can run a gym. In fact, I have a buddy hear who manages one.

This is not a joke: he went directly from selling cars to managing a rather large gym over in American Canyon, where they make earthquakes, and he's doing well with it. So, if that fool can do it, then the sky is truly the limit.

Who knows, maybe people not using the gym they've paid for is the worse thing that can happen and they must punish people in the event they're thinking about it. I always make the mistake of asking when I'm paying it, what it's for. They think I'm being hostile. I think taking $25 just for the privilege of paying them more monthly to use their gym is hostile, but that's me.

Cato told me that yesterday's post was a rant, so who knows, maybe I've just become a bitter and estranged old man. Or just estranged, or old, or bitter, or any combination. The most preferable word that describes an aging man is dignified, and I have mainly disqualified myself from that classification.

Well, Cato told me that he liked the post. Then I offered that it was a bit of a rant, and he agreed. So, it's not fair to claim that he described it thusly - I did. But he is living in Berlin now, and so easy to confuse with such subtle differences as liking and loving. My prediction is that he'll be a leather queen within the year, demanding that the wall be put back up with governmentally regulated glory holes installed every 69 meters.

Painted on both sides there will be the phrase: Ich möchte nur Freunde sein...

You'll need to figure out for yourself why all of my peccadilloes include people wearing outfits that ultimately turn their ears into a type of lubricant-resistant handlebars.

A little hint: it's to help control their mouth.

I think this is all healthy to talk about. That's how Oprah has helped, by encouraging me to discuss what consent means to me, to see where misunderstandings might happen. If we could just agree on the same language when discussing these issues then we may one day all finally understand what No really means.

My safe words are and always will be: Palomino Thunderclap, used in tandem. They should be yours also, for safety reasons. This phrase will of course be included as part of your non-refundable $25 signup fee. You'll get a battery powered glow in the dark sticker that you can try to affix to your forehead, or where your forehead might have otherwise been. It comes with its own remote control. So easy to lose in the dark. Don't worry if you do, every five minutes it's programmed to playback an audio sample of my whispering voice: I just want to be friends.