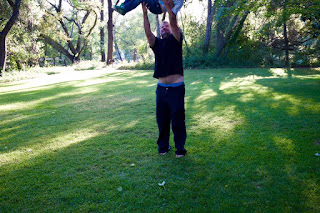 (When he could be lifted)

I'm ready for the weekend to be over, for my own free time to start. Starting my time away from work with a three day stretch of parenting was unavoidable I suppose, but has reminded me that for all of its joys parenting is primarily a task. None of the synonyms for "task" have positive connotations except maybe "mission" and then only in the imagination of my younger-boyish self.  Chore, duty, and job all carry the weight of burden with them. They are heavy words that beg to be met with procrastination.

Strange - I just tried to find a word that basically means a "happy task" but it doesn't seem that there is one. The websites I humored quickly devolved into talk of the joy of religious duty. My less than thorough research produced no word that would indicate joy in a responsibility embraced or completed. It seems that a word like pleasure or satisfaction must be combined with one like work to give a sense of what the speaker might mean. Having to use two words when there should be one is extra work, so it does capture the spirit of parenting.

Only two things matter about being a parent - doing it well or poorly. Everything else is tedium to the minds of others. Good parenting gets a gesture of approval concealed in mock condescension or even genuine delight, depending. Bad parenting will always be the subject of perennial discussion. Everyone, it seems, is an expert on the paths to ruination.

I'm convinced that social media is little more than the symptom and residue of unresolved familial neuroses. When I was involved in the whirlpool of underground dance circles I realized that I was surrounded by people with complicated or challenging family situations, or worse.  I was like them. I've never been quite sure why. It comes as either a relief or disappointment, depending mostly on whether I have writer's block or not when I stop to consider it.

Family is the institution that most first seek to escape, and deeply involves their initial feelings of liberation from oppression. A child's first bicycle represents the untethered magic of independence. For me, it still does. Few that I know think back to their first bike with anything other than fondness. Even those that rode, remaining forever prodigal.