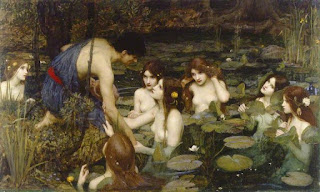 (Hylas and the Nymphs)

Yesterday, after work, a ride up into my regular, boring, daily valley. Halfway up a car pulled behind me and refused to pass. After a couple minutes of that, maybe the eternity of two, I pulled over and stopped, forcing the car to pass. As it did, a dehydrated old man had his window down and decided what I needed most now was his conversation. He started off slightly vexed, explaining, There are thirty-nine blind curves on this road... It's not safe to pass... I listened to the words while calculating in my mind that there was no possible way for there to be thirty-nine blind curves on this road, that number was too high, but he was nearing a hundred years old. Fuck it, I thought, just let the old man lie if it is what he needs.

But then came my turn to interrupt.

That's why I stopped, to let you pass.

Well, you're one of only three cyclists that has ever done so, and I've lived here fifteen years.

I don't like other cyclists either, that's why I ride alone. I think they're all a bunch of assholes. Their bikes are worth more than they are.

He held out his old dry hand to shake mine: My name is Ron, I live at the top of the hill, the house with the palm trees and metal chairs. Why don't you stop by, we can have a chat?

I would love to, but I'm racing the clock. I do this ride every day on my lunch break and I only have one hour to do it in.

No, this is my lunch break, from work, I lied. I only have an hour to do my ride. I time it as perfectly as I can. I always race the clock, so that I don't have to ride with those fools. Time isn't money, it's worth more than that.

Okay then, I understand. Stop by any time and say hi, if you want. You're a good guy, I can tell.

And that's how I pretended to befriend the owner of my favorite house in Lovall Valley. It's the one on the top of the hill, the one that I most admire. I've written about it here before. I'll never stop and chat with Ron, of course. When I am riding I have no chat or prattle left in me. It is all the lone echo of my internal monologue, pithy revelations concerning the self and others. Mostly one-liners that I never stop to jot down, or loosely structured paragraphs, also lost to the circulatory system. Nothing to share with strangers, just the shrapnel of long ago exploded gibberish.

Well, except I do share most of it with the ones who have cornered me here. It's as if I've done some speed in my sleep. I awake and can't stop writing. The side-effects of a lifetime's monologue. I have never had writer's block, because I have fewer doubts than others. I just permit myself to be wrong much more often.

After Ron had pulled away, off and easily up the heart-bursting hill and into his three car garage, I summited the hill that I know better than any other. I half expected him to be standing out on his industrial lanai, near his waterfall, waving as I passed. Though of course he was not.

After the fires, his house was the first in the upper valley that I was able to verify had not been consumed, and the one that made me the happiest to confirm. As I mentioned, it's my favorite. Not only because it sits at the point of personal victory - at the end of a row of uphill rocks on the side of the road, the finish line at the top of the hill where Sonoma becomes Napa, his house seeming to straddle both counties - but because of its design, constructed of smoothed concrete and naturally weathered corten steel. It's a genuine beaut of a place. All lines and sharp angles, the color of rust, concrete, and reflective glass. It sits on a hill that is at the top of another hill, facing the valley, the sky and the sun, with what must be quite an arresting view.

Perhaps I will stop by some day and let Ron disappoint me with his casual conversation. He'll turn out to be far too much like me, wishing mostly to rant or rave, inexplicably wanting to be heard in his recurring complaints and scattered joys.

Maybe he will confide that he is afraid, that whatever meaning he believed he brought to his life is now fading, disappearing from the surface and the soil of the earth along with him. Perhaps he is like many others - in part honest, though also scared, hurt, wounded, or worse. He'll likely never admit it. It will instead arrive in the standard envelope of anger and disappointment. The confusion of a life whose belief in purpose can not equal its point of purposelessness. The curse of watching one's final moments arrive meaninglessly.

Lucky thing for Ron. I always know just what to do in those situations: challenge him to an arm-wrestling match, then let him believe that he won.