... the belt that does await you 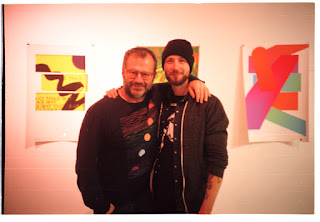 After reading yesterday's post, Cato offered to buy us two full-body leather outfits, a costume counterpoint to our already matching pink bunny suits. He emphasized that our new leather getups did not need to be matching, but the ones that he had already picked out just happened to be sold as a pair, and more importantly that they were not on sale.... They were sold at a private place, an establishment that offers no discounts.

He has assured me that my place is in Berlin.

I know that I'm being juvenile, but what the fuck? If you can't joke about being a leather queen then what have we been fighting for? 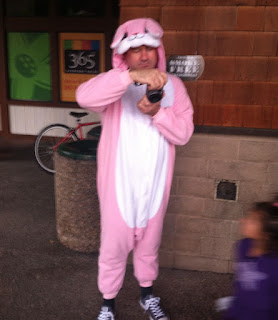 It's unfortunate, that Cato and I have no two-shot image of us together in our bunny onesies. Because that is the image needed to flesh out today's post. 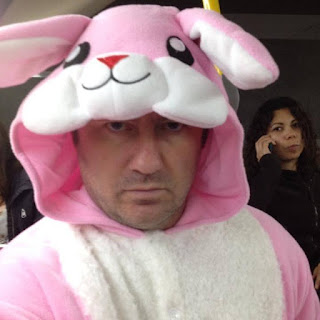 Well, it is not my intention today to further explore the possible effects of Berlin on Cato's fertile mind, only to relay that not only did he respond positively to yesterday's post but that clearly his mind constricted around those words with his own specific notions of pleasure. His is a participatory enthusiasm.

Cato identifies as a heterosexual hopeful.

Also, Ugh. He just sent me a thoroughly depressing text about his experiences in Berlin. I hate America now. I've fought against feeling that way most of my life, at least since the Reagan years. One text from him and I am prepared to go home now and burn my passport.

Well, not quite yet.

Is wearing a bunny outfit a form of genus or maybe species misappropriation? I'm asking for a liberal friend. If so, then my apologies go out to the people who protect and defend such matters and concepts. It has never been my intention to pilfer the essence of bunniness. I just think their fur feels so soft and good on my balls and asshole. It all feels lucky.

Now is likely not the time for me to talk about my extensive bunny colonies at home, but in the spirit of disclosure, there is also that to consider. My attempt was to assimilate with my bunnies, for the strict purpose of acculturation, not to merely be their fuzzy sexual overlord.

Okay, let's not belabor the issue. There were a lot of good animals on both sides of the bunny hutch.

Jesus, that's what's so fucked up about Trump. You can't even mock his sensibilities or lack of logic without somewhat confusing the listener, making it seems as if the mocking is in some ways equal to to the nonsense from which it derives. To mock him is to also seem like him. What a truly horrible villain he is, with the unconscious ability to annihilate all nuance.  Do you remember those people who claimed that Obama was the most divisive president we ever had? They were and still are the enemy.

Okay, it's a Sunday and I have the day off from my sabbatical so I am making light of things that I have no power to change. I'm being insensitive, which is of course hate speech disguised as free speech masquerading as callous stupidity.

I am against everything unfair that has ever happened in world history.  Specifically in America, Florida, New York, California, Somoma and here on our little street called Happy, and in that order.