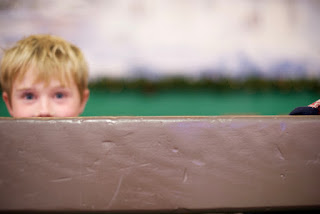 Yesterday, there was some ice skating up in Santa Rosa at the Charles M. Schultz skating rink. The one that was spared in the October fires. Though its being spared was not among the first rumors that we heard or freely distributed. There was so much speculation and so many reports of little local landmarks being engulfed in the wild hysteria of hearsay.

A few days ago I was riding my bike and smelled a wood fire burning. Before I had time to think about its effects it had already gripped me with a quick bolt of fear. Irrational as it is - the mind an attic crowded with ghosts.

The pics from the rink were as you would expect, pretty much. Shooting under such comically mixed lights will generally either produce accidental images of interest, or none at all. My day was more of the none-at-all variety.

There were young skaters conducting their fledgling pirouettes in the center of the rink. As expected, most any possible photographic view was obstructed by graceless traffic, moving in ovals.

I brought a lens that was not entirely conducive to that type of shot, at least from that distance - a lone 50mm prime.

There was one girl there dressed in figure skater blue, born without a waist: 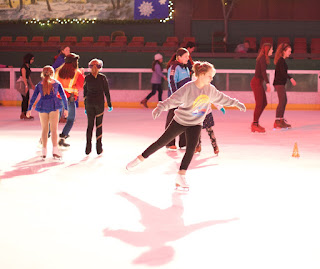 I tried to use the flash to wash out some of the mixed multi-color carnivalesque lights of such a place, never bothering to change my white balance to Fluorescent Warm, so the images were mostly crap.

My favorite was the out of focus one above of my little buddy, J, but there were a couple others than I liked, if only because they were mistakes of one kind or another. 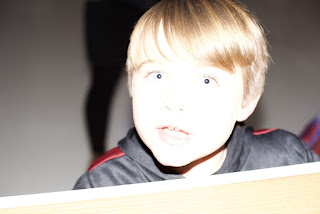 It was after skating, after dinner, on the ride home, that I started to have more fun shooting. There were scenes of mild action and industry on the roadside. Framed by the dashboard, the frame within a frame. 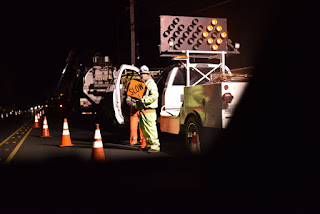 There is an absurd expectation of privacy that roadside workers sometimes have when it comes to pointing cameras at them from within your car. They have adopted the imaginary legal position of so many cops, that taking their picture is somehow a criminal consideration, or should be, one always left to their discretionary mood.

There is no such thing as a reasonable expectation of privacy in public, and personal photography on public property requires no consent. Being in public makes you public.

Always photograph cops. They simply love the attention. They'll sometimes go out of their way to single you out and tell you so. 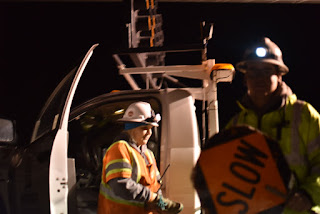 I tried to capture familiar objects on the side of the road. Well, familiar to wine country anyway. Things like old wooden water towers, peppered here and there in the vineyards and old family estate homes. 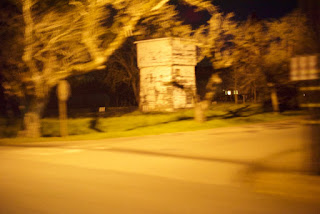 I did the obligatory motion-blur images that nighttime driving in the car demands. Every so often an apparition of light appears and almost takes on the characteristics of something living. Ghosts of the Machine Witch variety. 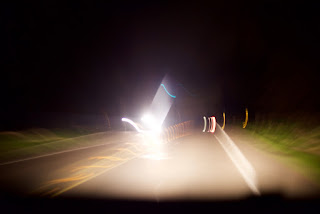 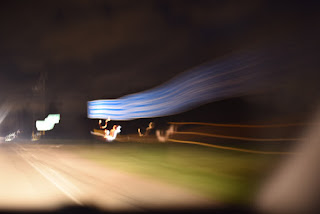 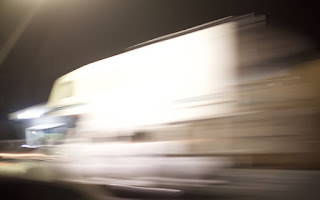 With light and motion being the main subjects, everything lucky takes on a kind of mythic quality. The subject of a given photograph exists in a quanta state in which you can vaguely tell what something is but never fully explain what it is doing other than moving through time - extraterrestrial  lights dancing in the road, signs riding some imaginary wave of time's passing, a truck insisting on its speed and direction. All of them lose some of their assurance of certainty.

Once you forego the notion of there being discernible things of any kind then you are free to roam the near total but familiar abstraction of dancing roadside lights, framed by the perspective lines of the road, all leading to a vanishing point while seeming to vibrate away from that same point. 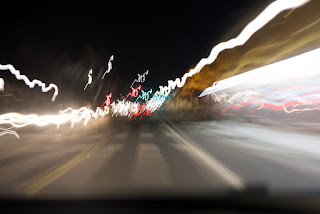 I tried to lose the vantage point of the road, but all lights either remain ahead of you or pass by on each side, forcing the familiar pattern of lights dancing. Reminiscent of the last thing that you remember seeing as a teenager before you slunk down in the back seat and began to contend with the newfound fear of the drug that you had taken. 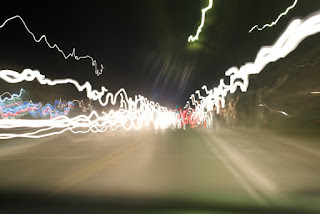 Any attempt to remove the road from the image results only in further illumination of the chaos. 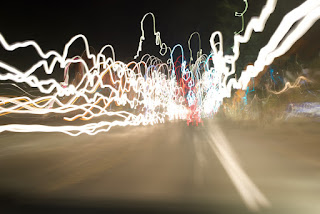 One last turn before home, rounding past where the ice cream place waits on the corner, the one with delicious flavors, so many kinds, where the colors of the well-lit sign invites the attention of parent, pedestrian, puppy, and progeny alike. 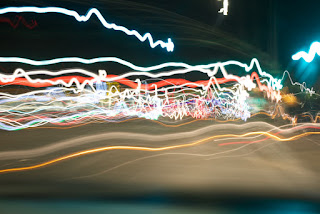