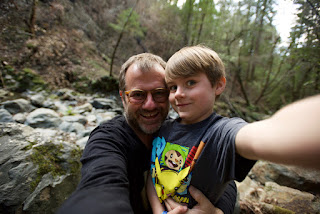 Yesterday, I lolled and lounged most of the day, breaking up my stretches reclining on the couch with trips to the gym, riding my bike, and reading. I have avoided the internet and my work computer almost entirely. By early afternoon I was already wanting to go get the boy out of school and check on the campgrounds near there, to see how much the fire had damaged. To tickle again to life my sense of the morbid, to reincarnate my fascination with destruction. As with elsewhere in the valley the damage was extensive but the camping areas still stood, the little observatory survived. Many of the upper trails had been destroyed. Most everything upwards was gone, many volunteers were now needed.

We stopped and chatted with the ranger, who told us that the campsite was used by several fire teams as a sort of emergency makeshift base, so they were reasonably well protected. The road leading up to the campsites was, like others in the area, scarred by the flames on both sides running up into what now are open hills. Most of the houses survived. Yet the ugliest one, the one that has always stood out as being repulsive to the eye, was burned to the ground while the neighbors on both sides were unchanged by the flames. It seemed both suspicious and intentional. The lot was no more or less unattractive now. The charred debris competing with the memory of the previous structure in chaos, displeasure. Its aesthetic misfortune now complete.

Here is a map with the closed trails in red, for anybody who may have mild interest in the region.

There is a short path to a waterfall on the drive up to the campsites. I pulled over on the way down the mountain afterwards with the boy and encouraged him to go for a quick hike. He left his jacket in the car and I didn't notice right away, so we made it a very quick hike, along the path near the creek that leads up to and away from the modest falls.

I brought my heaviest camera and lenses, for reasons I'll never quite know, though doing so did allow us to take two-man, father-son selfies with me holding up the camera and the boy happily working the shutter release. I wasn't wearing a belt, as my formulated weight loss program has shown no signs of success, my midsection still keeping my pants snugly where they belong, held aloft by belly pressure. I had one of those dorky soft lens pouches with a belt strap, but it was near useless without the belt, which was fine by me. I still like to imagine that I look cool and not like a dad/photographer. An idea that somehow survives in cutthroat conflict with the actual.

So, I held the extra lens in my hand as we hiked, leaving me useless in an emergency. Well, not useless, but I'd be forced to decide between watching my son do something dangerous or dropping at least one expensive lens to be able to do anything to help, possibly delayed by my momentary indecision. 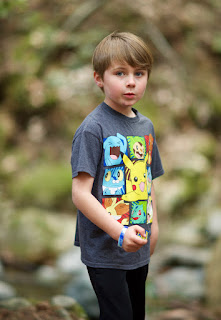 Well, if he does hurt himself at least I captured this one last portrait before the accident, I thought. It's only my job to document, not to interfere. These are the legitimate ethical concerns of a parental documentarian. I reminded myself that if I were not there to film then nature would simply take its course. If there were a mishap, then how can I be sure that I had the right lens on to capture it.

You spend your life dreading the arrival of one unlucky moment, in either of you. And that's to speak nothing of mom's health, which triples the concerns. Please nature, so lovely and true; be dear, be sweet; let us live awhile free from pain, hidden from death.

My life seems like anybody else's. Or more specifically, those that don't have kids - with all my fears, joys, and expenses doubled or trebled. Everything is increased twofold or more except time, which is halved and then halved again and again until the end arrives as less of a surprise but rather only the moment that insists on a final end to all procrastination. This fact I've tried to remain aware of. Wanting to be beloved without desire to hurt. Life sounds so easy when you reduce it to descriptions matched with proscriptions. Love and pain arrive and depart in vague ways, at least when they haven't singled you out to handle more severely. To say that few things surprise me at this uncertain age is not a concession of defeat as much as it is an acceptance that ultimately everybody acts selfishly. Parents that wish only to be left alone perhaps most of all.

I remember once hearing human life compared to the laws of thermodynamics - you can't win, you can't break even, and you can't get out of the game. May as well laugh along a bit, spend all your money, travel at night on trains through mysterious lands, wake up and drink the best or only wine in the house. Howl, before your howl becomes a wheeze. Nothing matters. It's fine to scream that as a truth into darkness, also. Living is the only preparation for death that is permitted.

When the fires displaced us I remember the feeling well, of wanting everything to burn, to be lifted into the skies in cinders, smoke, and ash, leaving only the absence of the previous. Or rather, I wanted everything that is mine to go; to be freed from the stuff of my life. I don't pretend to understand in full that flirtation with personal annihilation, its vague hint of sacrificial flame, but neither do I pretend that I didn't feel it. I've felt it all along, something about it is very familiar: the impulse towards sudden escape, even if through destruction, the final release from things. All of this because I don't own a single lamb to offer to the fire.

It's not a sensation that has left me quickly or with much comfort. To summon it requires only its thought. Its appearance, seemingly out of nowhere, resembles that of love or any of the other tempests of heart. It arrives spiritually amazed, all enveloping - a mystery that answers itself, and may depart without you. What feels more true, more alluring, than such magic.

The boy just woke up. After making him breakfast I went and laid down on the couch with him. He laid on top of me, pushed my face together with both of his hands and laughed. Then said, I wish your face wrinkles were ticklish right now. You wouldn't be able to get away. 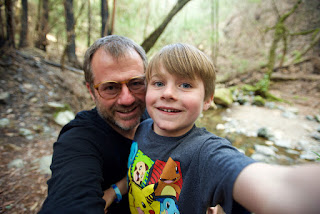