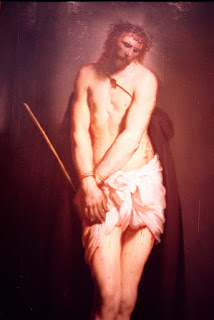 One of the girls in our group committed suicide, once she was a woman. I think of her death more often than I should, as is often the case with suicide. They tend to haunt. She used a gun in her departure, as unforgiving a device for such a purpose as ever there was.

She taught me how to play scales on the piano and how to derive some basic chords from those scales. I forgot most all of it, but I do remember going to her family's house to play the piano, to try to translate what little I knew on the guitar to the piano. It was the only access I had to a musical instrument other than my own guitar. She was ushered into the Christian fold and held there by her family and whatever angels there were to help. She seemed to accept her religion with certain caveats. She was eager to give oral sex but patently refused to violate the sanctity of her crevice regions, though she seemed brimming with curiosity about how that might one day be. I suspect she likely found out, though she was no longer a part of my life for very long after high school. The last I remember seeing her was when Peter Murphy's Love Hysteria came out. I was maybe 20, she must have been 19.

There was something vulnerable about her, a bit too much so. How is one to gauge such a thing, but that's what we do. It's the feeling one gets, I suppose, culled from what others project. There were girls whose approval she sought that were quite mean to her. Very mean. After I found out about the circumstances of her death it was almost all that I could think of. In part, I blamed their meanness for her demise. Across two decades I had some scorn for them. Still do.

In men or women, some vulnerabilities appear beautiful and fragile, the crystal cracked, for reasons I've never quite understood beyond the purely subjective. These delicate fissures in a person are near poetic - to be protected or in need of some protection, some inner softness trapped out in the rain, ever receding, in danger of disappearing, taking everything with it.

Other vulnerabilities just seem to be annoying weaknesses. Forgivable maybe, but very trying in the persistent self-presentation, the calculated perching-in-wait, of them all. People wield their weaknesses against others, as an imaginary appeal to the other's virtue. Demanding the sensitivity of others rarely results in anything of the kind, but rather silence or detestation is more likely. I see that much more clearly now. It bores me, when I do it most of all. I used to endure it more willingly. Everything's a disadvantage waiting to be used as a silencing cudgel. Pain repurposed as power, similar to how some people will confuse meanness for strength. I suspect that's what those girls thought they were doing, confusing spite for something much more cool.

I had started a post that mentioned Raising Arizona when it came out, going to see it with a youth group. That's all it took, a mention.