The winds, the fires, the winds 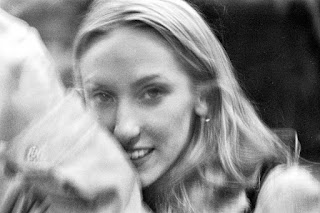 Oh the seasons, here they come; bells jingling, carols calling in the distance... reindeer riding the roof of my mind.

The word trespassing only started occurring to me as the verb of it disappeared.

Yesterday there were winds pushing back and forth all up and down the valley. I rode north, to the top of the watershed - St. Francis winery. The chaotic force of it was unsettling, reminiscent of the night the fires started. As I was returning down the valley the gusts would push me towards the edge of the shoulder of the road or towards the center of the lane of traffic. Only about two or three feet of clearance exists between the cars and trucks on one side and a rocky death on the other. Perhaps not death, but sudden pandemonium and much pain.

Most days it's not a problem, but I have been less than aerodynamic lately. I've gained back about ten pounds that I had lost last summer. It saddens me. Being fit feels much better, of course, but it takes everything in commitment. My clothes agree with me more, but who can spend their life negotiating with a pair of blue jeans?

Ah well, I have often struggled to find moderate places to exist, between the periods of havoc and mayhem. So, I try to enjoy moments of normalcy when I can, which is what I have now, I think.

CS sent more film pics from his trip to NYC in the early 2000s.

She and I sure did kiss a lot, could not get enough of one another, it seems. 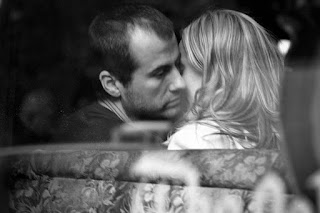 We have so few pictures of us together. It is odd, to see these images from the past.

My favorite snapshots of us seem as if maybe they were taken by a private investigator. 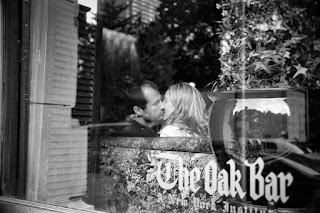 How does one break into the world of bribery?

Notes from the dossier:

This is where they met at The Oak Bar for drinks and lunch. They sat by the window and kissed repeatedly, unashamed of themselves, of what they were doing. Later that same evening she danced naked in The Plaza fountain while he watched her.

That last part is true. One summer night when I worked at Apple on 59th St. and 5th Ave, the overnight shift, Rachel came to see me for "lunch." We went to a bar and drank martinis for an hour before it closed at 4am. As I was returning to work I convinced her that we should be like F. Scott and Zelda and go swimming in the fountain. She was game. She got undressed and jumped in, naked as is possible. I have some pictures around here documenting her courage.

The taxis and stray cars bursting down 5th Avenue as she gamboled a bit, just before the idea of a night in jail really took hold of us.

Ten quick years ago, no more.

I wish I could write a beautiful book to break those hearts that are soon to cease to exist: a book of faith and small neat worlds and of people who live by the philosophies of popular songs. - Zelda Fitzgerald