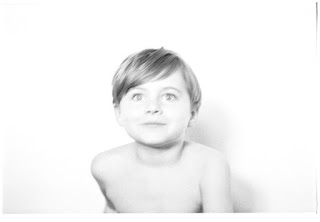 I've run out of pictures for this site. I've been shooting 35mm film almost exclusively, so I have few digital images to work with here quickly and easily. So, older negative scans it is. I like today's image, overexposed nearly to a fault. It's the type image that you almost have to try to take on a digital camera but happens quite naturally on a manual film camera, where you are trying to set the shutter speed, aperture, and then nailing focus all in a combined instant. It can not always be done perfectly, and exposure issues are common. I like the look of them on black and white film, at least.

On digital cameras I tend to rely very heavily on aperture-prioirty mode and will only switch to fully manual if I wish to create a blurred image to represent motion in the frame, or for some other specialized purpose. I suppose that all purposes, or functions, on a camera are specialized. I rescind the fallacious sentence.

I bought yet another cheap little camera body for $43. One "designed for women," or so said Nikon when they were marketing it. Women would not need to fuss with all of the complicated mathematics that go into taking pictures. Check out the instruction manual. The 80s were my Mad Men decade. We believed that women were being treated nearly as equals and that the struggle was almost over. Looking back now it is easy to see that wasn't quite the case. Men seemed interested in women's liberation as a potential sexual coup on a massive scale, while only marginal advances in actual equality were being made. I see that now.


I should be careful writing that way. Some do not like it when I agree with liberal premises any longer. I suppose I can understand why. The liberals, or rather the Dems, have fucked everything up for the rest of us. They failed at so many things and now they're all doubling down on more of their election losing attitudes. I'm hoping for the best, but I think the Dems will do well in 2018 and then get their asses handed to them again in 2020. Their organized outrage only lasts about 24-30 months from any major defeat, and then even less for their victories. Too soon they devolve back into infighting and bickering about the appropriate terms to discuss gender issues and the extent of evil that Trump represents rather than agreeing on any solid liberal basis with which to appeal broadly to voters.

I would run on the platform of promising to remove all gender or sex designations from all law at the state and federal level. That would be it. You want equality, let's create it by removing any and all references to male/female, man/woman, husband/wife. All of them, from every single law. Then let equality rise up through the courts in the most dynamically conceivable way, erasing the bullshit that politicians are now using to make claims for their perpetual usefulness and value in the regard of fighting for those rights.

Let politicians find some other criteria to tighten their grip on the imaginative mind of the populace, and vote every last one of them out of office that resists those changes. There is no compelling counter-argument that I know of. Please let me know if I'm wrong, dear anonymous?

You would no longer need a candidate that was strong on women's rights or any other category of identity, those distinctions should dissolve. What you would find if that did become the next major liberal impetus is that many would suddenly reveal themselves not to be for equality at all, but rather that they wanted their identifiable group to have advantage under the law. If you want equality then all special categories of personhood must be obliterated. Except maybe childhood/adulthood. I haven't thought that one through enough yet, because you can guarantee that someone would fight to bring back child labor if we did away with those protections.

Not all of it, but many claims of injustice would become something else, something more telling. Others would simply act as if "that's not true equality." Suddenly, we'd have to listen to the arguments as to why men and women should not be treated the same under the law. Because there are always sensible seeming reasons to favor one and limit, or even punish, the other. Always.

Most groups don't want equality, they want increased power. They use the claim of inequality to fight for power. Most claims would dissolve naturally if the expectation of equal treatment were met. They know this, so they struggle to keep the struggle alive rather than by undermining the presumed basis of inequality: law. It is the fight to hold the claim of grievance which fuels them. Victory is best avoided, as nothing will ensure one's demise faster than the claims being satisfied.

The assertion of inequality allows people to avoid complete scrutiny towards their own actions. The sufferer is somewhat pre-forgiven for whatever response they choose, because, you know... they had to do this or that.

It was justified is the often made claim.


So, while we're keeping ourselves busy by applauding everyone's ever increasing level of courage and resistance, why don't we do away with the legal mechanisms which make that resistance and courage necessary.