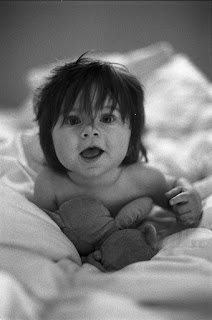 I forgot to buy Christmas gifts this year. I relied on mom to heed Santa's secret summons. I bought mom something and I've been stockpiling little gifts for the boy throughout the last month. I am not a great shopper for the wants of others, unless they happen to like cameras, books, or music that I also happen to love. Under those circumstances I am the best. I've been told that I'm a bad shopper because I am a self-centered narcissist. That seems plausible enough. I do think about myself more than others, and more often. That's partially because I live and work mostly alone. When I go out places I'll find myself thinking about how stupid other people are. So, it all balances out. Everybody seems like a Star Wars fan to me - harboring some diehard belief in a universal force that also seems to oppose their basic principles and requires their heroism for the galaxy to be safe.

Sure.  Go beat up the devils, silly.

I don't get it, but maybe that's because I'm not a Jedi. None of them ever get laid. What are we, twenty boring episodic disasters in and nobody has even gotten or given a hand job yet? Lots of saber fondling, lots of homo-eroticism, the occasional disturbance in the force, but no old-fashioned penetration. It must drive the all fans crazy that Jabba the Hutt was the only one to ever get any nice, sweet tail, and that was only implicit. We never get to actually see Leia be the sex slave that they chained her up to be. Deep in our pants, we knew.

Is there such a thing as a Jedi feminist? If so, why no uproar at the misogyny? There is so much power of male pubescent sexual angst held harnessed in those light sabers. You press the button and it comes gleaming out like an orchestrated glowing of glandular discharge. Always at erection angle.
Oh, I'll leave Star Wars alone. It probably needs some private time anyway. I don't blame anybody for wanting to escape, even when the want is a need. We all deserve some harmless escapes.

As always: Fuck The Pope!

I was scanning old negatives again last night. Images you have perhaps seen here before. I wanted to improve on the low res scans that had been done at the time of processing. I'm not sure that I've done that, but they take up more space on my hard drive now, so that must be a good thing. I kept the one far below tilting, as if the ocean and everything with it were heading off screen. It's just slightly troubling, as if they're about to vanish from the edge.

The one above was about a week before his first haircut. I gently cautioned against it. Once clipped, we can never return. I argued that he wasn't going on any job interviews, let it grow. That picture and a few others were taken one prelapsarian afternoon downstairs at our house. I remember it so well. Barkley on the bed next to him. He and I in that happy little world of our own. 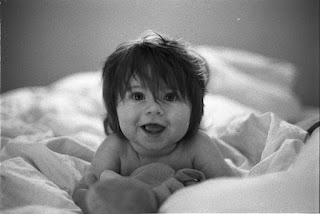 I am sitting here now in the pre-dawn, listening to Holst, distracted by it. Not a Jedi, not a Stormtrooper, neither a Vader, droid, nor a Princess. Only this surly smuggler Solo. Witness to the force of Alderaan still turning onwards, ever spinning east; never arriving, never leaving. 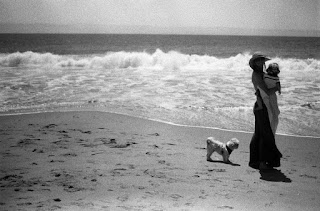 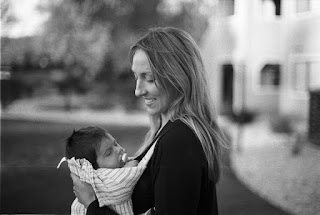 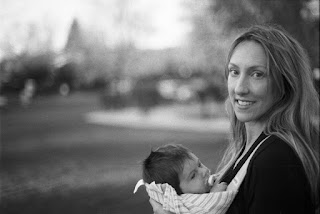