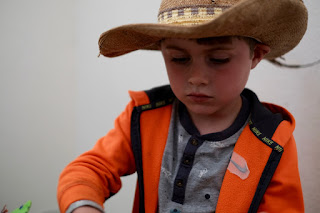 There was a series of events in the last few months that stressed me in ways that I wasn't quite prepared for - Rachel's father dying, the fires in the valley and surrounding area, even the schedule changes that we went through over the summer with the boy's school. Now the fires in southern California seem to be reigniting some of those feelings for me. I tried to ignore it all - the fires are far away. There is much more to it than just ignoring, though. I'm not sure why that is. I understand that these are probably normal feelings, but my desire to avoid seems almost unnatural. I'm losing my ability to process some of the simplest and most recurring feelings. They are all appearing as a mild anxiety rather than the emotions they should be. It makes no sense.

I was watching a video of a kid in Knoxville that described his being bullied in school and I found myself at my kitchen table crying while watching it. Not quite uncontrollably, but I couldn't pull myself together for a few minutes. I felt bad for the kid, of course, and it's a difficult video to watch, but I recognized that my reaction to it - which also included the impulse to beat the living snot out of those little assholes that were bullying him - was not exactly healthy either. Seriously, I had visions of just bulldogging those mean little motherfuckers. Then I realized it's just a reaction to feeling helpless, knowing that there's little or nothing I can do about that or anything else.

... like net neutrality. One gets the feeling that it's a lost cause and I'm exhausted at the idea of losing anything else, any other single cornerstone of imaginary fairness in any small part of the world being eroded by those that wish to control more than they should, for either personal or corporate gain.

I remember always hearing it when I was growing up: Nobody ever said life was going to be fair. So, I started saying it all the time: Life can be fair. There was a time when I was younger, perhaps still in my late teens, where I would say that sentence to people as often was appropriate, maybe a little more - Life is fair. I believed that maybe it was just a mindset thing, that if enough people started saying that life can be fair then eventually people would say that life is fair, and that maybe they'd act accordingly and life would become more fair. I was what John Lennon used to call a dreamer.

Like the people who say, God never gives you more than you can handle... What the fuck? Then what is death? Shouldn't that qualify as the moment in which God gave you just a little bit more than you could handle. Imagine dying and the first experience you have on the other side is being confronted by an angry God, screaming at you because he thought you could handle just a little bit more. I like the idea of an irate, disappointed God throwing a tantrum just on the other side of the pearly gates. It's comforting, like the Old Testament.

I'm not so sure how I feel about anything any more, but I hope that kid in Knoxville finds a healthy way of coping. Some professional athletes have stepped in and want to visit him at his school and perhaps even confront his tormentors with him to talk it out. That's not good enough for me, though. I envision one of the football players arriving liquored up, losing his patience and then slapping the little stinky daylights out of one of them. That's the video that I want to see.

You read that correctly - I advocate for an adult hitting a child and another adult capturing the precious moment on video and then posting it online for my perverse, temporary, and sadistic pleasure.

It is perfectly legal for me to feel this way. I've already checked into it. Don't even try.

I know it's not right to think those things, or worse, to actually wish for them, but I really need this thing to happen. It's a horrible thing to realize, that I want bad children to show signs of fear and to maybe even physically suffer a bit, but I'm not willing to do anything about it myself. I think I'm trapped somewhere between vindictiveness, laziness, and poverty. When I daydream about winning the lottery it always includes very detailed revenge scenarios. I dream of hiring private investigators and assembling dossiers on my enemies much more than taking vacations, always have.

Now, if there were a whole bunch of kids then I wouldn't want to confront them myself. I would only do it if there was maybe one or two of them and they were under a hundred pounds each. Any more that that and the flight impulse might take over the fight desire. Even if there's just one fat kid then I don't want to do it. I would call the fight off. I don't want to fight a fat kid.

It's much easier to imagine others being mean for you, to enact your evil wishes and bring your cruel and humiliating visions to life. This is the precise reason that I have never sought political power. I would always use politics for petty personal vengefulness. I think that's a very natural impulse. It feels right when I close my eyes and envision it.

Now, I can almost hear the reaction of people reading this: That's not going to help anything.... (in a snotty and knowing tone). Well, I disagree, and I'm the expert here. It would help me right now to have a video of the kids that were bullying that little boy getting their asses handed to them by some athlete I've never heard of, one who will likely suffer some sort of brain damage soon, preferably while he's exacting justice on these children. If that could be part of the video then I would treasure it all the more. Before his mind becomes a spine barnacle he should use his might for something fun and righteous, like beating up mean kids after school because it's the right thing to do.

Sure, in a perfect world we would teach children tolerance and understanding, but there's so little time left for any of that. Kids should be afraid of acting that way, that there will be real life consequences that include pain and shame, tears, possibly even unending torment of some kind, nightmares, etc. Fear should be both mysterious and tangible. Everyone should be afraid that life isn't going to be fair for them. That is what has always made the world a better place. Progress would have never occurred without the feeling that most everything is bullshit, bullshit, bullshit...!!!

Look back at history and you'll find that life improved mainly because people were afraid that it wouldn't. You're not going to find many historians that will agree with my assessments here, but that's because they were educated at universities where perfectly useful information becomes something else. I'm tired of being told that it was the dreamers and doers that made all the magic happen. It wasn't. It was those they were surrounded by that refused to believe in anything that made their progress possible and perhaps even valuable.

Tolstoy would agree with me here. I'm certain of it.

My idea of bullying those prepubescent shits would be to fly to Knoxville and speak to their class, explain to them that none of them are ever going to college or will see the world beyond their little depression factory of a town. Plant the seeds of doubt deeply in the fertile minds of those rabid little shit stains. I would explain to them how compound interest works, all of the horrors of life. I know it's not right, but there really should be a two-fold response to bullying. The athletes are offering some sort of protection service. I could be there to undermine their faith in the future. What did I write earlier: Fear should be both mysterious and tangible.

Yes, you should be cruel to children who are bullies. That's common sense. They should live their mean little lives in fear of others who are meaner than they. That will make them better people, eventually. I know this system works, look to Florida for the proof. If you need some sort of other assurance then look at the Knoxville bullies' parents and note how time and fear have worked together to craft them into being perfect people.

I wonder how I can monetize this idea? There must be some way to market these sensibilities to others.  Maybe I'll shoot a pilot commercial today, see if I can get a loan to help get this thing off the ground. We could offer online bullying packages. You could just pick someone you don't like, choose a package, provide your credit card details, and then a team of assholes would get to work making somebody's life regularly miserable. I bet Amazon has an infrastructure that could sustain this model. Replace their current drivers with failed or injured athletes that need a break.

The idea is not terribly far off from online activism. Doxing, I think it's called. Lou Dobbs was an early adopter of the process. It's perfect for targeting the weak, helpless, or those with differing opinions. It always works, even when the wrong person is targeted. It still sends the same message out into the universe.

How perfect is mob justice? Just take the beautiful system of democracy and let it loose on the very society that claims belief in it. All crowds begin by being objectively impartial. We should harness the unbiased genius of the mob and apply it to the social problems that need sudden fixing.

Whatever the spiritual opposite of Namaste is then that's what I'll be structuring my beliefs around. It's a yin-yang thing: I acknowledge the cruelty in you... (with a little bow added).

The world will always be a better, stronger place with fear.

Don't listen to the pussies.

Being different is wrong, you should worry about it.

I probably shouldn't have to post a disclaimer here, but the occasional reaction to my posts have given me shocking insight and realization that some people can not adequately detect the satirical or ironic tone in some of my writing. They wade through a sea of seemingly angry confusion, seeking rewards that can not be had here, believing this site to contain coherent recommendations on behavior. I've been told that I can be "dry" in my delivery, and perhaps that adds a sense of verisimilitude for some.

People are fucking crazy, every last one of them. The worst among them are the ones who claim there's nothing wrong with being different.

Somewhere along the way, I must have believed them.