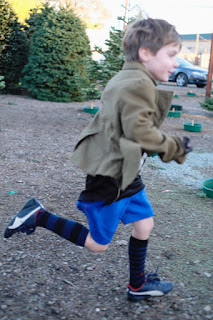 (shopping for a dead tree)

Ten days until Christmas Eve. I'll need to start doing something. Though what that should be I do not yet know. Amazon, I guess. I've resorted to telling the boy that all of the elves have moved to this vast South American rain forest, because of, you know, climate change. I explain that they had to diversify their operations with the harvesting of the coca leaf. I want to prepare my son to battle conservatives on their home front: the sanctity of Christmas.

I don't mind seeing the boy get so excited at the impending arrival of Santa Claus, but I do tire of the expectations of glee from others. I want to be left alone, mostly, until the season passes. I'm not being a Grinch, truly, I just don't have very much to pretend about in that regard. I'm happy, though detest the collective need to display one's feelings in concert with all of humanity. All of Christian humanity, that is. My feelings don't work that way. And yes, of course I have deeply conflicted feelings about family.

For some, anything less than a Showtime-esque Happiness-On-Demand demonstration is a clear indication that there's something wrong with you. Of course there's something wrong with me, the first thing I noticed about the word demonstration is that it starts with demon. Has nobody been paying attention? What the fuck? I have issues. People expect you to shelf most of your neuroses and half of all of your emotions simply because it's the season for it, as if these things check the calendar before happening. Why can't you just be pleasant?

I thought that I was.

Well, I want that for them also.

I try, I really do try, but it wears on me. There's a reason that many people joke about needing whiskey to get through the holidays. I have gained a stone in weight since last year at this time, so I cut out wine and beer from my diet a couple days ago, in the hopes of getting a cycling start into the new year. It's not a resolution, don't worry, I'm not like those people. I was just happier when my pants didn't press against me at every bite, the belt line reminder of my indulgences. I started noticing that I felt thinner after two glasses of wine.

That can't be right, I thought, that goes against what I know to be true.

Ah well, I won't write about my weight today. As much as this site serves as a repository for the self-helpings of others, I have perhaps belabored a few points.

The end of that sentence made me giggle. There is a perversity to so many things that make me happy. Truly, a deliberate deviation from the accepted norms, personal joy found in that sweet balance between secret contrariness and open obduracy.

Maybe that's also part of what I hate so much about Christmas: I do not find the ritual of it very comforting. Instead, I'm unnerved by it a bit. Not so much that I would take an imaginary or actual stand against it, but I try to lodge my complaints here and there like little stocking stuffers.

I can't be the only person that wants to grab an Elf on the Shelf by his neck and force his face deep into my open ass crack in front of crying children and screaming relatives. Right?

No, I don't have public sexual non-consensual interactions with Christmas dolls.

Everybody here suspects that I wouldn't really do such a thing.

I don't protest too much about it, either.

Be cool, Sean, just be cool.