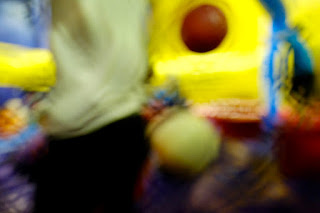 
Leave it to me to go to a child's birthday party and find a way of taking psychedelic images right out of the camera. No processing, or rather, only in-camera processing (jpeg conversion). It is just an out of focus image shot through the safety mesh of the kid's bouncy castle. What else am I going to do, interact with adults? This party was about two months ago and I had meant to give some of the pictures to the birthday parents, but I haven't. Taking pictures is easy, going through them takes time. Who has time. I went to the boy's Christmas play last night. The story of Jesus' birth in Bethlehem, even though other biblical facts claim that he was from Nazareth, which fulfills a different prophecy, of course. The story had to be fudged a bit in order to better make him fit the part of the mythical messiah. So, there is this absurd tale of a pregnant women wandering 69 miles in the desert to satisfy both prophecies. Ah well... my criticisms of the historical veracity of the play were not what the night was all about. I shot RAW images on my Fuji X-Pro2, forgetting that Apple hasn't provided native RAW support for my camera yet. Because they are uselessly pro-lapsed assholes. So, I have conducted an in-camera conversion to jpeg to provide you with the guiding light that is the star of Bethlehem, below. I think the world could use a few new prophecies right about now. Why not? I prophesy that Christmas will be over by Tuesday. Thursday at the latest, if the weather holds in the desert. 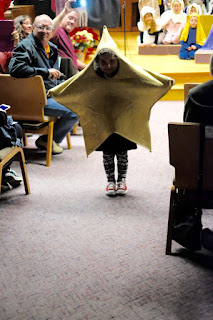 (The Star of Nazareth)