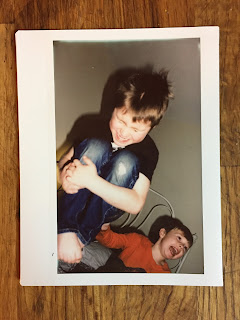 I did as promised, I rode my bike yesterday and tried to clear my head of all the noise. It worked for a bit. I am tired of politics, truly tired, particularly as most people are not even discussing anything political, they are thrusting social wishes and disappointments at one another without admitting it. To add to that problem, these issues are somehow embodied in poorly and half elected representatives, and doing half-battle there. There is no national discussion. Dialogue has gone the way of education. Phrenology will soon be on the rise again. Because the shape of a person's skull is an indication of their ability to post effective online opinions.

Personally, I have been enjoying reading the pamphlet literature of the "Flat Skull Society." Everything is a fucking religion now, and opinion a protected conversational category, freed from liberal mocking. Conservatives require a safe space, also, and they seem to want most the space that liberals were just in. They became tired of being bullied with correctness, so incorrectness will be their newly reasserted mantra. So many of them are claiming that America has spoken, yet neither side quite seems to have heard or understood what was said. The majority said No. Yet we still can't quite agree on what we all disagreed on. Trump won, but we're still not sure what it was that he won.

Ok, I must stop. My heart is becoming filled with the mud of hatred and I am the one allowing it. I must stop it. Who else can I trust with such a task. I wish to be left alone, but you'd never know that, the way I post and respond to posts. I think I'll schedule some time off from Facebook. I believe I have some vacation time saved up.

Maybe I really do hate people.

I did go on a great ride yesterday, down to the bay of San Pablo, to the speedway that sits on the entrance hill to Sonoma valley. The rains have produced the sound of water percolating across the rocks that line the drainage ditches along the small two-lane highway. When ignored functionally they sound like a creek's babbling, like nature. They line much of the route, so there is that pleasant diversion. Yesterday, once past the four way stop sign that marks Sonoma's perimeter, at least for me, there was the smell of freshly cut lumber, lots of it. I rode through the cloud of wood's odor and wished to see something built anew, something to rise from fresh wood.

That made me giggle. I have the mind of a pubescent.

There and back the wind was cool and the sky open, as if I was inside of a vast blue jewel. Few things do for me what cycling has. Every now and then I get a brief glimpse into what it is like to stop talking, to enjoy silence. I'll come out of a sort of hypnotic state and not quite remember where I was, or where I am, or where I am going. I'll have to look around to place myself along the route, to know what to expect, to remember what comes next. It feels great, truly, to have been free from noise for that little glimpse of a moment, that minor respite from the sound of talking. It is the result of riding a route multiple times. The mind is allowed to turn off for a bit, even though it is awareness that is sought, it arrives sometimes through a returning to it.

There are two rides now that I regularly do, both in opposite directions, each the Olympic Triathlon distance of approx. 40km/25 miles. One is to Saint Francis winery to the north, the other to Infineon Speedway to the south. There is a dichotomy there, I'm certain of it. It has to do with the competitive use of fossil fuels and the patron saint of love for animals, though I do not feel like belaboring the point here. Both rides are beautiful; anybody would be lucky to live where I do. It is the most alluring place that I have ever lived, and among the most prepossessing places that I've ever seen. So much so that the eye sometimes forgets, and must be taken again by surprise. A jump start back into the graceful curving aesthetics of a place, of nature. There is something so lovely about the principled agriculture of the land that appeals to the eye and mind. Perhaps it is only my love for wine that informs and fuels this inner value. I'm sure there are others that would see it otherwise.

Maybe I do hate people. There are too many of them - they ruin everything.

Death to silence, pirates, and tyrants.