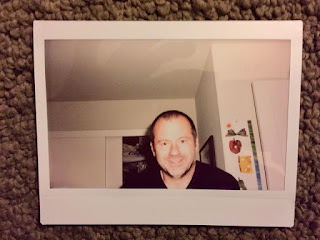 (Insta-portrait of a Liberal, taken by The Boy)

Being around other people's families for the holidays has, I believe, taken its toll on me. I can't tell if it is the absence of my own interacting with what I am seeing in theirs, or if it is only what I feel about "family" entirely in and of itself, but it has all left me rather unsettled and a bit exhausted. I am cornered out in the open, somehow, and I just wish it to be over. Everybody seems to be enjoying the glow of these times, but I can't seem to find the right distance in proximity between things, or from things. The more I listen, the more I talk, when I desperately need some silence. I need some time away. I need a vacation. I want to meditate right now. I should have started an hour ago.

I made the mistake of writing some mild politics here yesterday. I don't want to hear any of it it any more. That posting then triggered the obligatory constitutional conversation from a friend that knows no others words than articles, sections, and amendments of same. I am tried of it, really tired of it. The constitution should be re-written, then preserved in glass and sent into space for other civilizations to make use of. Ours has been improved upon by others that came after it and we should admit that and utilize those strengths. The people who wrote it certainly would. They would not have written it the way that they did if slavery had not been a "problem." Some say that "problem" has been fixed.

Wait, I should stop. This will trigger another constitutional conversation, and I will be forced to delete my friend from social media. Well, I guess he is my family and it is the holidays, so he can't be deleted and we're supposed to be arguing as a sign of corrective love for one another, but Jesus Fucking Christ.... I wish he could shut the fuck up about the constitution.

He has tried to tell me that he and his people felt the exact same way about Obama taking office that we now do about Trump. This is not possible, any amount of honesty would prevent it from being stated. His attempt to advance this claim is about to make me vicious, mostly because I want to be left alone, but also simply because Trump ≠ Obama. It is silly, if not stupid, to try to replace the qualifying symbol in that solution. Idiotic and dangerous, in fact. Trump represents something very different than did a senator, constitutional scholar, and president of the Harvard Law Review becoming president. But people see what they wish to see and talking about politics is not the way to be left alone. It doesn't work. It never works. I feel like an atheist trapped at midnight mass, on really strong acid.

I wish mostly to have fun with my son and to find a way to feel complete. That should be easy enough: care for my son, care for myself, remain open to love, and hate all tyrants. I can't figure out which of these is causing the problems. I suspect it is the fatigue felt at remaining open to love for so long. Why does having a woman in my life make me feel so much better about things that haven't changed at all.

Love is replaced slowly and noiselessly by useless diversions, once it evaporates and the well has run dry. Hating tyrants is innate, that can not possibly be the problem. Some would say: hate the tyranny, not the tyrant because players be playin', but that's nonsense. Hate the player sometimes, also.

If there are supreme court appointments to be made... Maybe one of the second-amendment people can do something about it.

I think I just need a break from arguing with far-right conservatives. You know, libertarians. There are arguments that can be had with self-described liberals, because many of them never bothered thinking about what they claim to believe, so it is easy enough to wedge a pivot point in. When crossing party lines the troops are too entrenched, the pivots that should hold are just ignored. The agenda is then imaginarily advanced without concern for the inconvenience of fact.

Bobby, if you read this and post anything at all as a response then I will delete you as a friend from Facebook. This is my promise to you, my Christmas covenant, designed to combat our mutual middle-aged daddy-dogma. Also, stop complaining about the hardships that the government has placed on your small business. When I describe unjust laws in states you always fall back to saying, Then those people should move to a state that better supports their cause. If your business is struggling then get out of that business. That's your version of freedom, so make your own wisdom work for you before you insist that it works for others, my dear Libertarian.

Also, Bobby... My friends all tell me that we should start arguing with other people. All of them say this. All of them, Bobby.

I'll try to write another post today, one that just describes the land around Sonoma that I see when I go on a bike ride. I will do my best to only relay my visceral experience as filtered through my senses. I will try to avoid describing the biological functions of the plants that I see, or the agricultural purpose of the beautifully beveled terroir. Those are well understood facts, and facts are what seems to be causing all of the problems in online politics. It is something that I would like to prevent from also infecting the nature around me that I so love. Should be easy enough, now that climate change is no more, and god's white hand is finally back to guiding the president's pen.

Praise the version of Jesus that won.