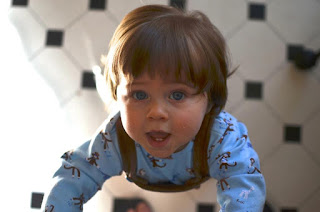 I think I'm going to go to a yoga class this morning.

That sentence was written without irony. I keep trying to add a qualifier to it, but they all make me sound mean. Or worse, stupid. Yoga is the exercise that everybody gets to poke at. I'm going to start chanting a mantra while I do reps at the gym. When I leave, I'll walk around the gym bowing towards all of my many Mexican friends, giving them a nice, fine "namaste..." as I leave. I wonder how long before somebody would bother to kick my ass senseless, leave me in the parking lot bleeding from my ears. Not very long, would be my guess.

I bow only to bowling lanes.

I've been pushing my workouts up in repetitions and time, in preparation for dominating Caitlyn in Napa. I'm going to take back Montreal '76, you know, for America.

Each day I arrive at exhaustion. The idea being to push that point slowly backwards in time until I am young once again. It's taking me much longer than it used to, which is pissing me off.

The worst part of aging - beyond the cellular process itself, which results in an estrogen fueled tiredness - are the opinions of other people concerning how to react to age. People that hardly knew what to do with the youth they were given are now filled with advice on how to spend my middle years. They get pissed when I say, Sure, if I wanted my life to resemble yours at all.

I don't get it. I don't walk around parties explaining why carrots are bad for everybody, or how many calories are in a banana, or why you shouldn't vaccinate your child. Getting older is almost like having a child attached to you. The unsolicited advice just starts pouring in on what to do with it.

Now, in fairness, I did sort of write yesterday about the differing experiences of drinking and that of abstaining. So, I guess I asked for it. You can't write about intoxication without begging to be examined for the purpose of improvement. It's what people do. They regularly commit to a state of being that requires assistance of some kind whenever recognized in another. I hope that I never become such an abstainer that I try to help others.

I have my own 12-step program. It involves 3 steps, done 4 times daily: get some sleep, exercise, drink water.

Also, to clarify, my boy was not the unexpected product of drunkenness as my post yesterday may have suggested to some. I'm not sure if I've written about it here or not before, but he was the result of what must be presumed to have been a mature decision by myself and his mother. I would not want the boy to one day read anything written here and experience confusion concerning the nature of his origins. There is already far too much dubiety about the origin of mankind, at least when explained by any of the world religions. He was wanted and welcomed here.

Let me end today's qualifier post on a lighter note:

Yesterday, when riding up towards the hills on the east side of the valley, I passed a woman that had her child wrapped in a body wrap on the front of her, as mothers often do, making them one again. For the brief moment that I rode by I saw her looking down lovingly, glowing. The image of a young, happy mother. After having a child of my own I have a deepened appreciation for such scenes, for the natural beauty of a woman's love for her child, etc.

The child was not a newborn, though I discovered that only as the concise experience passed. A small hand emerged from the wrap and pointed up towards the sporadic and fluffy clouds that dotted the bluest of Autumn skies above. The voice of what I believed to be a young girl excitedly said only, "Flowers!"