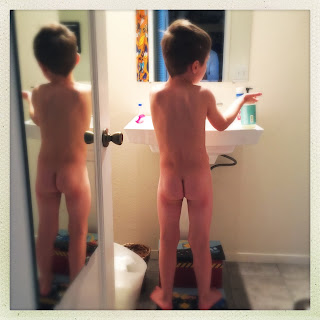 I'll eventually be arrested for the picture above, for its pornographic content. My main complaint with it is that I missed the full curve of the back of his feet. We'll all live with the new artistic sensibilities now. The government will cut off funding for every program except prison, which will be considered educational now also; the only institution that works. Make the Great Wall Again. If Trump simply lined up all of America's prisons on our southern border then that should just about settle that issue. We'd just need to prevent any escapes from the northern side and all will then work itself out the way that nature intended, through the ebb and flow of incarceration and escape.

CS tells me that there is a shortage of photographer-fathers that take good pictures (candid portraits?) of their sons. That's not what he said at all. That is my perversion of what he said. I just need to brush up on my Photoshop skills. I could be the next Sally Mann. Sally Mann had two daughters and a son, though, so she was able to establish a dynamic of compositional relationships. 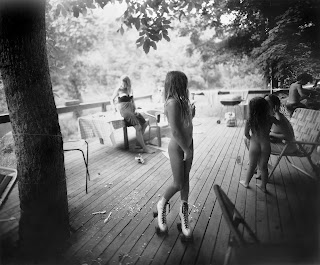 For those who do not know, Mann received some heat for the provocative candid pictures she presented of her children in the book Immediate Family. She was accused by some critics of exploiting her children. I have the book and I don't see that, at all, but rather only see a photographer astutely connecting with what makes images interesting - vulnerability, innocence, beauty, pain, etc. That they are of her own children seems nearly incidental, except for the intimacy of the setting in which they were taken and the affection that a parent has for their own children. That's part of my take on her work, anyway. That her children exhibited early signs of sexuality would surprise or shock only the willfully ignorant.

Right now my son has a pretend fantasy that his mother is also his girlfriend. I believe that's somewhat normal at that age. I used to date her, also. I probably believed a similar thing about her at one time or another.

In an unrelated sentence: It's the normal.

My friends are becoming worried about me. I've turned off my phone during the week and have disabled the alert messages on my work computer. Life was driving me mad. It was causing me stress, so I had to let it go. Now I live in a silent bubble at my kitchen table, one that allows me to work. The biggest problem so far is that when I do check my phone it's usually towards the end of my day, while I'm trying to go for a bike ride. I become overwhelmed and withdraw. I ignore the texts and go for a ride, but it eats at me, which defeats the purpose a bit.

I used to think that people became more distant as they aged. Perhaps as a result of the diminishing of their senses and faculties, enthusiasm slowly being replaced with disinterestedness, indifference. Now I see that they're just protecting what remains. Few things equal the perpetual trauma and crisis of aging. For those that are paying attention it all starts to become funny as you head towards fifty. You realize a thing that you can realize in no other way, similar to what Mark Twain had to say about carrying a cat by the tail.

Yesterday, I thought that I was going to a beginner's yoga class. I had it listed in my calendar incorrectly, so I ended up at a meditation class instead, which was fine and well and needed. I was still able to bow at the end and say Namaste... It improved my bike ride afterwards, truly.

Just before going in yesterday I saw the news about the fire at a party in Oakland. It was posted from a friend who was there, letting everyone know that she was now safe. I have reached out to another friend, to verify, as I noticed she hasn't updated Facebook since the day before yesterday. The "dad gene" is kicking in. I'll wait until morning has dawned before I text her. The last time I checked on her was shortly after Trump won. Who knows what may have happened to her since. She's probably protesting the Dakota Pipeline by now, feathered headdress on, doing a water-dance under the desert Milky Way. She is quite the dynamo.

Well, my weekend is now half over. I rode 25 miles yesterday and did not make it to the gym afterwards. I had told myself that I would do more, but the day sat opened in front of me inviting naps and showers, not lifting leaden weights and sweating. I spent the latter half of the day reading, trying to finish up a book that catalogs the parallel horrors suffered by two kids in France and Germany during the war. It reads like a Pulitzer-prize winning book. Always a little lightning at the right spots, to prepare the way.