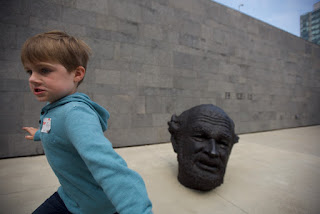 I made it up the mountain. It was as I knew it would be: painful. I was quite wrong though in my assessment of the neighborhood and the quality of the houses in the neighborhood. When I had visited in the car with the boy I took a few mental snapshots of some houses that stood out as being uncared for, though they are very much in the minority there, that all became clearer once I was cycling freely through these Elysian fields.


As for the uncared for houses...

There was one in particular that seemed to serve as a gated junkyard for old hotrods. The estate looked as if it had been dropped in California from a southern plantation. Easter egg yellow and off white being the one-time color pattern, though the columns were all wrong and the untrimmed bushes did nothing to help. The entire structure was in need of pressure washing, coffee, and a good talking to.

What remained of the lawn had not been preserved in a way that could be considered "cared for" in some time, years perhaps. There were cars in various states of repair and otherwise across the front, also lined along the driveway, perhaps to indicate their present functionality as vehicles. They each looked like they were owned by some failed ex-rock drummer. There was a Bonham-esque sense of abandonment to the place, as if interests in life appeared fully formed though with a mitigated longevity. Some of the cars were orphaned in space and time. Grass growing up from the sides where mowing is just beyond an option. Their state was the result of dedicated inactivity rather than it opposite. The phrase "death by vomit" kept insisting upon itself as I rode by, the entire place a visual hangover.

There were other houses that were not far off, cables hanging across windows without blinds, where somebody successfully installed the internet by themselves, splicing the old coaxial wire and running a new shorter one to a different wall, leaving their victory hanging across the path between the two locations rather than bothering to correct for it, as if MacGyver had once tried to save it from collapse. The front yard, looking like a tool shed had been dragged around the house a few times by a team of local horses. All parts left out to be bleached by the sun, some of them now partly sunken into the earth. A garage sale abandoned by time. I had the impulse to check and make sure that the house was sleeping on its side.

Yesterday, the boy and I trekked into the city to meet an old friend, one who had the temerity to question my memory of our first meeting in 1975's Altamonte Springs, FLA. It was precisely as I remembered it, where facts fade within the amorphous mists of life remembered.

My telling of the story correctly presages his entering of medical school. He claims to have no prior knowledge of what his academic pursuits would become, or none at the age of seven. I insist that my version of the truth is the one to cling to and defend. I have a story of our first meeting. He has only skepticism of my story. Florida is a stand-your-ground state and I am the only witness. So, there is that to consider, my legal defense for telling it. We grew up not far from Zimmerman country.

My binary family and his nuclear one went to lunch, then to the SF Moma. It was pleasant and uneventful, which is the best you can hope for with the involvement of a four year old. It is nice to have my son meet my friend's children. There is an odd circularity to the feeling. Part of it is perhaps caused by the underlying feeling that I never thought that I would arrive here, on the other side of the things I spent my life mocking. It is not nearly as bad as I believed it to be.

I suppose at some level it is probably just selfish, wanting your child to get a glimpse into your life when you were young. It all seems so unbelievable now - youth - particularly the ones that we enjoyed in the 70s. We spoke of the dangerous, stupid things that we did or were expected to do, all quite spontaneously, as if natural selection itself were not always peeking at us through the crack of adolescence. Somehow, most of us escaped.

Everywhere we went at the museum the boy wanted to touch and rub all of the art that he could see with his unwashed booger spears. He tired quickly of my admonishments and reminders. When I tried to explain that the art is there for everybody to enjoy, but only by looking at it, and that they wish to preserve it for all time.

What do you mean?

It's art, they make it all up. We do this at school.

Worth the whole day. I giggled with satisfaction when he said it, attributing all kinds of outsider status to the boy. I thought of adding Camus' The Rebel to the box of books that I will create for him to hopefully read before he enters college. His newly acquired DIY ethos sat well with me. I had to resist from relaying the anecdote yesterday, though I had hoped that I would somehow make more of it this morning. Some stories are just the dialogue, no need to provide context.

Oh well, mistakes were made in today's post. Good stories lost by their telling.


I tried to go back and read yesterday's post to make sure I didn't use similar descriptions of houses in today's post. I found a number of past-present tense shifts that made no sense and rendered the piece unpleasant to read, a sort of seasickness in time. I winced at the lack of care in what I was trying to convey.

Cato used to copy-edit for me, but he has abandoned that to pursue a life of genuine struggle.


Writing is difficult, was yesterday.