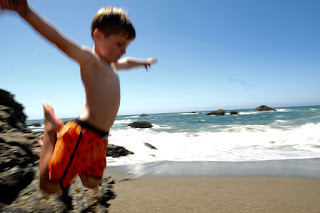 The weekend slipped by almost without notice, each year they move faster and become more elusive. I spent some of the time cleaning the apartment with the boy, some of the time riding my bike up into the sky along the mountain lines, some of the time cooking, there was a day at the beach, then it was all over. The weekend is insufficient time to recover. Humans need much time to do nothing at all.

I do. I need more time to do nothing. Nothing in my schedule - empty spaces, blank blocks of unimpeded time.

On the way to the beach the boy became a little bit car sick. I felt a little bit off also. I assumed it was my raging climacteric and the onset of his menarche. The cherry doesn't fall far from the tree, etc. It generally starts around our respective ages, approximately 4 and 48. Fuck, am I really twelve times older than the boy? Jesus, the mind makes for a terrible calculator. It's like having Melville's White Whale in the accounting department. I'll be gone before the boy even makes it to half of my age. It would take about 40 years.

I should not think this way, it leads to darkness, desperation, despair.

To where did the remainder drift.

I worry that any decrease in menstrual flow will make regulating my lunar-based behavior more difficult. I need to sync my period with somebody soon, or maybe a silver bullet, a cross/stake through the heart... otherwise I run the risk of becoming a spinster.

I am having some sort of mid-life crisis, some sort of zero-hour Rubicon moment. I have joked about it over the last few years, pointing out my unnatural obsession with expensive and some might say redundant interest in cameras, as well as a few other aspects of my character which could indicate an estrogen crossroads of some sort. But it has moved internally now, to ravage my uterus and rob me of my precious progesterone. I have found myself increasingly in estrus, though that is probably just the call of my eutherian bomb ticking. I am what is known as baby-crazy. It is a biological and sexist slur, and I know that we're not supposed to use such phrases....but I identify thusly.

To mock my condition is evil, stupid, and wrong-headed. The right to ostracize me has been brought to its proper end. Get used to it: I'm here, and I want a baby!