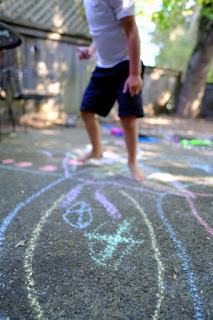 After work yesterday, I rode my bike up the valley to Kenwood. It was a good ride and the day was lovely. I took a few off-road paths, one through the woods, one of which was a little bit rough. As I was heading towards the gym I noticed the front tire had a leak. It felt soft. I kept riding as long as I could and skipped the gym, wanting to fix the tire. I walked the last mile home.

Everything was falling back in shape.

Then, I picked up the boy, came home, and made dinner. Now, do you remember me relaying that my freezer had partially thawed. This would not be the best place to thaw and cook spaghetti meat sauce for dinner, sauce that had partially thawed and then refrozen. In fact, this turned out to be a very bad idea, though I justified it at the time through a number of sentence fragments.

I had reheated it thoroughly and thought that would be good enough. It wasn't.

I read to the boy from one of his books and fell asleep in his bed with him, happy. When I awoke about an hour later I didn't feel very good. Everything went from bad to worse. I went to my bed and tossed and turned. Then the gates burst - the sweats, the chills, all else. I spent the entire evening ridding my body of the poisons that had developed within me. The idea of the boy going through the same helped keep me from falling back to sleep. I fretted about his health and kept peeking in on him to make sure that he was sleeping. Just walking around the apartment to drink water was difficult.

His mom came over early this morning and she says that he is fine now. Who knows, maybe he is stronger than me. I had two glasses of wine, perhaps that was it. But what could go so bad in a bottle of wine between one night and the next. It doesn't make any sense.

Vomiting makes you understand your body in new ways. My entire thorax was sore, but not from the contractions, I do not think, but sore from riding and the gym. I had become so used to doing a workout regimen nearly every day that I think I might have forgotten to ever let my body heal. I was just accumulating the need to recover.

My body has turned against me many times, but not usually for the purpose of health. Or rather, it tries to send me messages about my health, but it does not usually punish me for possessing any.

I am working from bed right now, too tired to make myself any better with coffee or juice. The thought of both of them turns me into knots a bit.

Now, I am forced to slow down and rest through the weekend.

Here I lie; I can do no other.