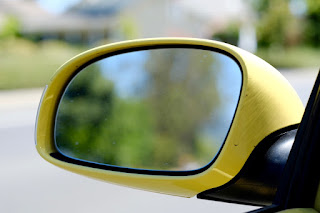 After picking the boy up yesterday, I decided to drive up the road that I've been trying to cycle for the last couple weeks, to see how much further the uphill portion is before I can find a spot where my heart and lungs can recuperate before advancing on the summit. Or rather, circling the summit via paved road, on a bicycle. I was pleased to find that the road only has another bend or two and about a quarter of a mile of heartbreaking hill before there is a short flat portion where I could rest and drink water without fear of tumbling backwards down the paved way that I came.

I kept driving up into the western neighborhood that is nestled there in the valley within the larger valley of Sonoma. Once we arrived, I could hardly believe what I was seeing. Gatsby-esque in reflection of the other valley hidden far away on the east side. Poorer, though not poor at all, only seemingly so when held up to wealth. Made by families that worked somewhere, creating their dream homes together, or even through separation and worse. These were not homes made with a swiping of the hand, as if they rose naturally out of the land that they commanded.

I suppose it could be NYC, or any other American city divided upon lines of wealth between east and west, though to live in the hills at all confers some sort of advantage of resources. The geography and feel of what I found made me to steal a physical form found inside the fictive one. The dual neighborhoods held apart by valley screamed East and West Egg. I imagined locally famous infidelities that must still haunt the present. Cars screeching out of driveways in the night, glass shattering, scenes remembered. The police called, though they just all stood and watched.

The last new homes that were built there happened sometime in the late 70s or early 80s. Each was different from the others, though same in that they were on a similarly sized lot and built with materials and design ideas that only differed in degrees. Each reflected the stylistic preference or lack of the original owner. Some humble, others trying to say more than they were, even then. Each was of a kind. Homes that represented single qualities - youth, wealth, vitality, cool chic, whatever, even the nest, as if the house was meant to resemble a fancy European cuckoo clock. You could hear the whisper of disco coming through the windows of a few. Saturday night parties that perhaps still get talked about here in our little enclave from the world.  The first time for trying this, or that, or more of that. Some who just stood and watched.

Others seemed sensible, as if the owner believed themselves to be a farmer. So happens that their farm isn't located on farmable land, never was. They neglected to buy the empty lot next door in time, another dream farmhouse popped up too close to theirs, then on both sides. The farmhouse sunk into a suburb of variables. Some had chicken coops or a few rows of grapes, anything to indicate something else, meant to mean the ruggedness and hard work of the inhabitants, perhaps their love of earth. Either that, or their modest alignment with the more glamorous life of the metropolis. The thin vertical windows appearing along the sides of the contemporary houses that hinted of skyline at night, each populated with a similar angle of a similar room. A twist on the idea of a fishbowl. Some houses seemed almost to be dresses as much as buildings, picked out and purchased by those with too little experience in making those choices. Not knowing how, many chose poorly. Aesthetics only considered when gravely below a certain threshold, and too late in construction.

All of them were once nice. The remainders that could be called such were scattered here and there. Many needed some sort of visible repair, a cleanup or makeover. There was a dispiritedness about some of them, a long absence of pride or care, as if they could sense the decade that they had been built and what they must look like now, and just to hell with it. All of the homes were past the age of bearing more children - the kids that had been had since flown. The nests needed trimming, though few neighbors would likely take it upon themselves to say so. Some of them must have looked much better at night, when the lights buried in the yard were turned on and shining upwards at what used to be flattering angles.

There is a single-home wealth there, nothing like what exists across the valley up in the hills on the eastern mountain line, snuggled into the valley of the skies, where one wonders if this is one estate among how many others, and where in the world. The expanses in the eastern fold seemed to have live-in guests as the norm, entire structures built around the very idea of guests, of owning celebrated friends that currently lacked the requisite wealth but were cared for graciously nonetheless. The structured act of perpetual charity. It is either a pool house or the divorcé chateau, depending on season.

In the other hills along western ridge there is the sense that almost all guests went home that night after dinner and drinks, some living within walking distance, of course. The others, let loose on the mountain roads to swerve their way downhill, toward their own.