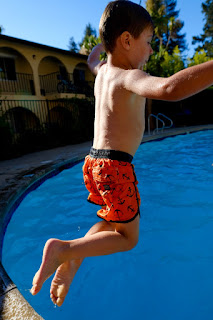 The boy is about as sweet as a person can be. Yesterday, I picked him up from his summer gymnastics camp. His mom was busy with work and meetings through the late afternoon. We went and had a little sushi lunch, then went for a bike ride to get some ice cream at the top of the hill, then to the pool to verify and defeat the crippling heat of summer.

Mom came by to pick him up. On his way out with her he went to his room and grabbed a few items of importance. He left them on my bed - a book of abridged Star Wars tales and a cotton Darth Vader character that he loves and sometimes sleeps with. He told me that I could cuddle with it if I wanted to. He seems to be grasping just how much I miss him when he's not here.

The littlest of things, so fragile as to nearly disappear. Watching him grow up and become the person that he will be is a mixed marvel. I am already wistful for a past that has yet to become. I know that I'll one day miss the little boy that he is now.

He adores most all things made of ice cream or cheese. I will usually let him have the last few bites of anything that we are sharing so that he need not panic or rush. Lately he has been getting near the end and offering it back to me so that I can have whatever remains. This must be difficult for him, as he is a tremendous lover of almost all flavors of ice cream. Who would have guessed that being witness to this miniature offering of kindness could be so overwhelming.

I've said it before, and it bears repeating: having kids isn't for everybody. I'm not even sure that it was entirely for me, at the time. You end up becoming a different person, if you try at it at all.

I bag on aging quite a bit, but there is one positive value emerging from it: I am gaining ground on becoming the person that I perhaps should have been all along, a better sharer of ice cream.