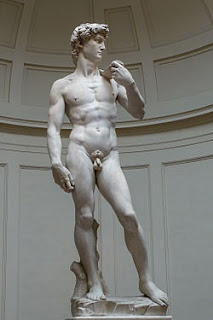 Yesterday's post was not about weight, either. The subject that I am writing about rarely ever changes: a sense of ignored guilt.

I was at a music festival, chatting excitedly about things that I had yet to consider.  Somehow, in my defense of Woody Allen I made a claim that I have been thinking about intermittently ever since, because I don't fully believe it. The person to whom I was talking was denouncing the talents and worth of Woody Allen. I assumed the defensive position, believing him to be of considerable value as an artist, knowing that what hung in the balance of this argument was either the victory or the defeat of the very idea that a man should be able to marry the adopted child of his ex-girlfriend if he and she so choose as adults.


The accusation made was that Woody was too self-involved. I responded that all art was self-involved. Without prompting I made the retrospectively extreme claim that even Michelangelo's David was a deeply self-involved work, revealing as much about the artist's inner world and impulses as it says about the collective world we share.

Or, something like that, if that thought can escape through grinding teeth undamaged.


Afterwards, as time passed, I thought, No, no... art has become increasingly self-involved as society has become far more self-conscious, more self-reflexive. David is not a representation of what Michelangelo looks like, where Woody Allen's film are a representation of not only what he looks like, but also how he thinks about what he thinks about, and what occupies at least a portion of his inner world. David is drawn from a biblical myth.

That answer satisfied me for the time being: that comparisons across such great passages in time were difficult, particularly in assessing the artist's intentions, and when considering different mediums. While both artists have been well studied, they were each products of their time. Naturally, it follows that their art reflects or reflected the varied sensibilities of those times.

I remained quiet on the subject, thinking that perhaps I should stop sniffing around at music festivals.


Something was bothering me though, of course. Some inner division on the subject kept eating away at my willingness to accept the merely chronological escape. All things can be compared by intelligent minds. The ability to make distinctions between things is a hallmark of thought - discernment is the very evidence of thought. Perhaps more important than the ability to recognize differences is to discover the invisible threads that connect things and make them comparable, which is a way of measuring distinctions.

So, I started asking myself about the process of art, of creation. Within each artist there exists some inner division against which they routinely press in an effort to produce art. Self-doubt, self-expression, self-honesty, self-loathing, self-discipline... don't all of those forms of introspection equal self-involvement. Or, is self-involvement only when the artist reveals those inner workings as part of the art itself.

All options are available at the onset. The final result is the work, which is a record of the decisions made, to the nearly complete exclusion of those choices abandoned, which correspond to the inner landscape of the artist, as honed by their abilities, then translated through varying degrees of physicality into the external world.

Both artists had help creating their works. I thought that was a good point of entry. A series of unanswered question was the result. What constitutes self-involvement in a work made by many? Well, vision might be one. How much of the artist's fingerprint can remain before it becomes an outward work of self-involvement. It's not as if David was made in secret, or was detached from the artist's name during or upon creation.


But no. That's where I gave up. David represents an ideal, Woody Allen's films do not. If anything, his work involves the questioning of, or at the very least the occasional necessary bending of, ideals. His films are a testament to the difficulties of compromise.

I should know better, to not go to battle with the high Renaissance. I had lost. I knew it. I should learn to know when to stop talking, but I probably won't. I should, at the very least, know when not to take on Goliath. Ideals exist externally as well as internally, and David expresses that more fully than do the films of Woody Allen.

But something kept eating at me. I wasn't entirely sure if that was true or not. It was that strange thing which occurred inside the artist, that residue of self that occurs regardless whether the result represents an ideal or not. The work itself can not be self-involved, because it is detached from its creator by the time it is complete. That we are able to better recognize and assess presumed levels of self-involvement makes the comparison difficult, misleading.


It is that conditioning of self, the preparedness to listen to and respond to the inner impulses. That inwardly spiraling process of self which produces art. Do tempered obsessions mean similar things?


David's eyes look to Rome. Woody Allen made a film about Rome..... Nope, nothing. There is no way to adequately gauge self-involvement, and writing (at least as the basis for filmmaking as storytelling) and sculpture are awkward bedmates.


Talking about art requires practice, practice involves the self. Whatever abilities that I used possess to convince myself of things seems now gone.


When is a work finished?

When the artist gives up. 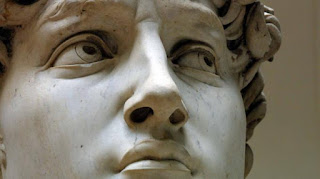