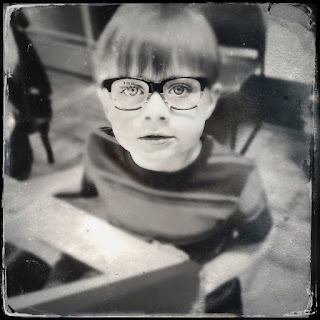 The boy likes to try on glasses and costumes, some of which are mine (below, the glasses). I would bring him to Burning Man, but I'm not going this year and I'm not quite sure if he's ready to be away from Mom for that long. He is a sure fit with the Burning Man crowd, though. Born an expert on the subtle ways of imagining. He embraces many of the same values: Radical nudist ice cream eater, etc.

We received news yesterday that over the weekend one of his schoolmates was hit by a car and killed. A three year old boy. The family was crossing the street. The boy fell out of a stroller in front of a car. The details are murky, ultimately irrelevant. It has affected me more than I might have guessed. It is difficult not to share in the grief.

Fear fuels the imagination. I know that it does. I can awake from most of my nightmares, and yet imagine ones from which there is no waking. It's easy when attempted in the quiet of morning.

Don't worry, I haven't found Jesus or anything like that, though I've heard that he has been knocking for me.

Death is a difficult adult concept even at its unpleasant best. For an abstainer from faith, there is the struggle with meaninglessness, a concept that is not always easy to convey in a comforting way. I am cautious when advancing the idea that life is transitory and mostly self-contained. It is unsettling to grasp and then believe, that there is no meaning to be had outside of your own existence, and that the love and experiences we generate are limited in scope by our own senses, by our own ability to live, by our capacity to feel.

It does not scale easily out into the universe. It barely survives a lifetime.

If there is some secret way to discuss death with a child then I have yet to happen upon it. He's a bright kid. It sometimes worries me, and worry is a celebration when compared to grief. 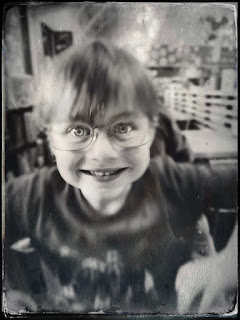