Biking in the Rain 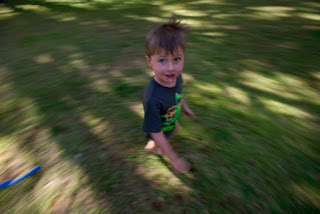 I feel like a kid that can't play with his toys on Christmas morning. The bike is an unused object of beauty sitting in the back patio. I had the boy yesterday, so a ride was not possible. I tried to get him interested in riding his bike, also. I had thought that we could go on a fun little bike ride together and that would at least let me be on my new bike for an hour or so, get a feel for how it handles at very low speeds, with sudden turns. I am beginning to question if my older Marin even had 27.5" tires. When next to the new Kona they look more like 26", though I didn't bother to measure them.

There is something comforting in a bike's simplicity. Things can go wrong, or can break, but those things can be easily fixed, usually by the bike's owner. Almost everything else in the world, if it breaks then replacement is required, or a specialist to repair it. One is left helpless when a watch dies, or a computer fails, or even if a toaster's heating element goes bad. Almost everything in life renders one helpless in failure. You are victorious at the point of purchase alone, all else is a lubricated downhill slide towards your next purchase. There is an ultimate uselessness to all things purchased.

Though, a bike can be easily fixed at almost any bike shop, usually, or at home by anybody with moderate mechanical skills. A bike is one of the few things that has kept the promise of the industrial revolution. Everyone should own and use one.

That concludes my Cyclist Manifesto.

It's true, though. Even if your frame cracks, you can just swap it out and move all of your components to the new bike. It's not a total loss.

That should conclude my Marxist dispatch on bikes for the time being. I am hoping that the boy's mother can watch him this morning so that I can go on a ride. I am happy with my purchase. It will bring me years of pleasure and pain.

Today, there will be other things that we hope to do, also. There will be a photo shoot, if we can corral the boys together towards a common purpose long enough. We had discussed a few different sites for shooting, but I think the square is going to be the best, it offers the most "scenes" from which to choose. There is a duck pond with an arched brick bridge, the horseshoe lane around the center fountain and koi pond, the four-sided city hall, a performance stage and theater, lots of trees and open areas of grass, a playground, etc. All of which are very close to each other, and there is shade as well. The only thing missing at the square are the rolling hills that the place is famous for.

Today is meant to be a scorcher, in the 90s. Yesterday was the same, though there was a light breeze blowing through the valley, which reduces suffering greatly. It is not like a Florida 90, most people barely notice here, they just try to stand in the shade whenever possible. Florida will survive the approaching doom, they have all been living under water for decades.

I have a friend that insists that he will never live somewhere hot again. I feel the same about humidity. The heat doesn't bother me so much. It is the choking influence of the south's sultriness that ruins life there. I remember that there were a few cases of malaria in the Sunburn State about twenty years ago.

I'm not kidding. This is not a place to live. It is where cockroaches go to find their spiritual center.

Okay, that represents the totality of my insight into bikes and weather. Do not cling to them, they will have evaporated once a new morning has appeared before each of us.