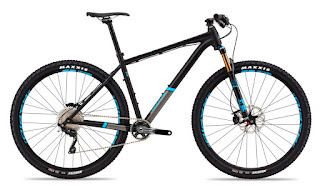 Anything to get away from politics, police shootings, and racially charged online conversations. I know, white privilege, that I get to walk away somehow not shot and with the right to vote still intact. Social media is becoming a little bit too similar to watching an old man watching the news: a lot of screaming at the screen, insisting that the world is choosing all things poorly. Or, that at least one side is causing all of the problems, and that the president is useless but the next one shows much promise, as long as their opponent is defeated. It's like listening to a drunk, the repetition of the story offers nothing new, but the volume just keeps creeping up.

So, I've been looking at more bikes. I can't decide if I want a road bike - something I haven't had in many years - or another mountain bike. The one pictured above is about a thousand dollars cheaper than the Bianchi that I mentioned the other day.

It's a Marin Indian Trail, a racing bike that is a step up from my antiquated Marin Nail Trail, the new version of which is six hundred dollars less than the Indian Trail, if I were to just replace my existing bike with this year's model. A simple replacement that'll cost me about two thousand dollar signs: $s. My current bike is so old that I can't even find an image of it online.  A near approximation is below. It's time to replace. It's slowly becoming a junker. The more that I abuse it up the side of a mountain every day it has begun to give and squeak and creak like an old dried skeleton.

I've realized that cycling is a solitary hobby, for me. I have few friends whose advice I can rely on here. My anarchist friend from war-torn Europe encourages me to get the Bianchi, with the Campagnolo components. It's an argument that lures me, though I lure easily towards the things I already want.

A beast of wont, what I want now is a new copy of the thing that I already own. 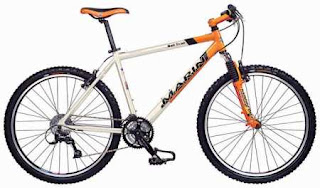 (slightly newer model than mine)