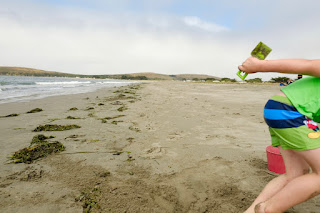 An indolent day, reclined on a blanket stretched across sand. Nobody was there, yet the fog covered each of us for most of it. The temperature never quite reached beach levels. Warm enough to play, cold enough to encourage staying dry. Not the boy, of course. He possesses an indefatigable eagerness to make mud, of which the ingredients include ocean water and sand.

Few things energize the mind of a four year old as does the opportunity to touch the many discovered dead things that have washed up on shore. There was the occasional procession of him dragging the unfortunates back out to sea - seaweed and plants of all kinds, the empty carapaces of crabs, elongated plants that had lost their hold from the near depths - all day, there was a returning to eternity.

Soon enough, there will be the onset of his basic education on bacteria and germs. It is our only hope.

There were Frisbee lessons, adventures up and down the shore. Great stretches of water had been trapped from the receding tides and were calm, shallow, and warm, and inviting. There was emotion management. Small talks of love and correction. Warmth in the breezes. The sudden necessary turns of love, of hugs, encouragement. The stops and starts of a child's whimsy.

You're not wrong, you're just having feelings.


I sat on the shore and wondered how many sandals were lost to the beaches of the world, slipping just past the waves and out into the great sandal graveyard, washing up days later alone, or not at all. The many pairs of them separated beyond use, beyond fixing, beyond return to pairing. I thought to what the shores of Africa, the Mediterranean, and all throughout Asia must have given up to the deep over the centuries. Then, of course, I felt stupid for thinking such a thing and had nothing else to replace it with, so the feeling lingered and wound up here.


Returned to a fish, corn, and potato barbecue. Yes, we did most of the cooking on the grille, in foil, with butter, oil, and light spices. One of the wraps broke open, spilling potatoes and onion to the kitchen counter where it was then finished in a tray. Never to be foiled again. An iced bottle of rosé, Cuban jazz coming through a station on the television, then more pictures taken of the boy playing in the backyard until it was time to eat.

After, I read James Joyce on the couch, and tried to feel happy. 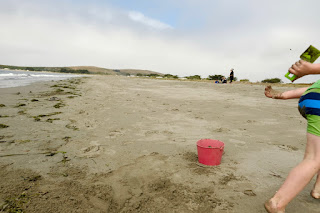 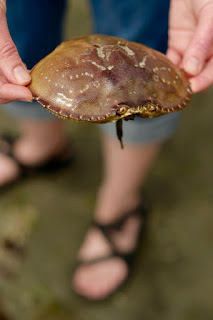