A place where amusement never ends 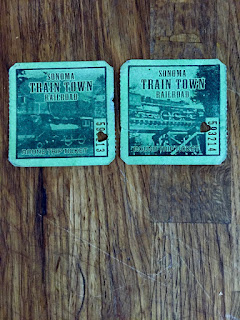 Yesterday, on a lark, the boy and I went to Train Town, the local one-stop shop for themed park style adventure here in Sonoma. Trains being the obvious lure, though a permanent carnival being much closer to truth.

I had perhaps mistakenly mentioned the train place while picking him up from school, as a passing possibility. Then, when we were nearly stopping at the local market to buy some stuff for dinner he asked me if we should not already be hurrying to get there. I told him that it was closing very soon, and that the last train had probably already run for the day, we could save the tickets I had for a train ride for another day when we might enjoy them much more. I tried a few other angles, to see if there was any manipulative persuasion that I could conduct on this little boy's heart to divert us from a disappointing afternoon.

There was none. The boy has so little imaginable future as to be negligible, at least for him. He is nothing if not a wonder of the present. For others, there is always so much future imagined in a child that it is almost all that anyone can see, some version of something else.

We arrived at Train Town and scrambled out of the car to see what rides might still be operating. We saw the whirling motion of a mechanical contraption through the trees, one that was designed to manufacture vomit. We ran to it. By the time we arrived we had already developed alternate interests in other rides that were yet further back into the park. We kept running. Then an employee, a barely pubescent high school kid, asked us if we wanted to ride the ferris wheel.

He could not sell us tickets, though. A concerted dash back towards the front kiosk where tickets could be purchased. We returned as quickly as our tennis shoes allowed. The boy passed over our tickets to the kid, the kid took what was owed him and locked us into the caged metal seat. Up we went. Sweeping backwards the way up and forward on the way down. Such minor exhilaration made me a cautious father. As a form of instinct, I kept making sure that the boy was locked in and secure, trying to hug him as I sat next to him, to not to let my ability to grab his arm ever move beyond my reach.

Towards the end, the kid controlling the show asked if we wanted to sit up at the very top for a bit.

We looked at the treetops, the mountains in the distance, towards the great wide open bay to the south. We found all the rides below us and traced the train tracks with our fingers as they circled around and back again in oblong and overlapping ovals beneath us. The boy told me that Mommy loves the merry-go-round but that they were not real horses. We saw a duck diving in one of the oddly greenish colored decorative ponds, connected by little green rivers. The boy excitedly told me that we could see the duck's butt, and that's where poop comes from.

It sure is, buddy. We laughed along at Duck Butt.

Almost as soon as we were each settling into a bored acceptance the carnival gears started cranking once again, down along the edge of the cog we dropped back into fun.

We had tickets when we landed. The kid left in charge of the place asked what we wanted to ride next. The roller-coaster it was. Two more tickets and two laps around the coaster. The boy's excited laughter was so infectious and youthful that for the briefest of moments I felt as if I was a father and a grandfather all at once. It was so much fun that I almost didn't see it for what it was. It was the type of skipping-school-and-eating-ice-cream joy that grandparents are famously scolded for when caught. I thought that we might get in some sort of trouble, though by whom was an absent mystery. There was an atmosphere of barely mitigated recklessness to everything we did and all we did was sit there and ride.

The kid running things asked if we wanted to go around the coaster again.

Away we rode, giggling as our lives together went up and down the metal hills, around the sloping bends, only to return again to the climb up to the first drop. More than once I thanked myself for not having a camera with me.

The coaster had run its course. We disembarked. I was just starting to launch into a sentence or two about it being closing time for the park and that we should plan on leaving. The kid who will one day own the place asked if there was any other ride we wanted to go on. I explained that I had two tickets for the train. He got on his walkie-talkie and after a few seconds the news came back that we had better hurry. Our tennis shoes tore up that trail once again, tufts of dust flowering at our feet, astonished at our speed. We arrived. At less than ten minutes to closing time they were making special concessions for us, and why not, I thought. We can't be the only bandits left in town.

We chose a seat on the train underneath the roofed portion where it feels more actual. One other patron, a lone enthusiast for who knows what, boarded along with us a few cars back. He was viewing the world through his phone screen - documenting it for posterity, I presumed. In time, a different kid emerged with a conductor's hat on and took our tickets, punching a hole in them with a paper punch. They were our last, the ones that were for the train only, so we agreed to make this ride matter.

Once settled in to the engine car the conductor blew the whistle and engaged the needed controls. The steam engine rolled forward on its 1/4th sized railroad tracks, expressing as best it could its playful relation to locomotion.

The track is familiar, we've ridden it many times before. Almost immediately after leaving the station you go through a tunnel, coming out on the other side to a landscape that is not quite visible from where the train departs, lending the impression of transformation. The tracks along the outside of the park provide an overview of all that there is to see - model houses, barns, villages, animals, bridges, waterways, and waterfalls. The terrain is beveled and terraced as to invite the sense of distance, arranged in such a way that travel seems imminent, where adventures seem impossible to escape. The boy and I fired imaginary hands at the bad guys that we claimed were hiding in the trees - ones that we knew we hit - augmenting our sharpshooting with blasts of the sound of gunfire.

Over bridges and then under same, through tunnels and over landscaped rivers, the boy and I found much else to look and point at. The darkness of the tunnels and the smell from the engine makes for a silly excitement as you enter daylight once again on the waiting end. The boy hugged me, and told me of his great love for this place, and me.

The train makes a central stop at a model ghost town. One with a saloon, a church, a schoolhouse, fire station, outhouses, water tanks, llamas and goats to pet and feed. Off we went, to run together our breathless and imaginary ways. We snapped a lone phone picture, struggling to sit still just long enough to make it happen, atop the red fire cart made of wood, water, ladders, and wheels.

After a generous time waiting - the park should have already been closed - the other kid conductor announced that the train was soon to depart, so we ambled reluctantly aboard, still giddy with love for the choices we had made. 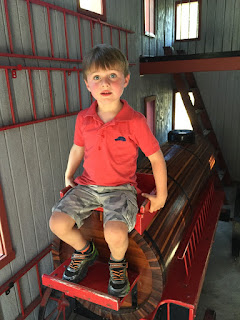