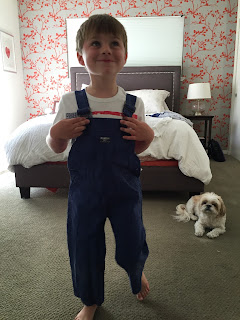 Disaster. Well perhaps not that, but failure at least. At least that.

The camping expedition in the backyard ended the same as it always has: the boy wanted to sleep in his bed. After I spent the time setting the tent up and preparing it for the night, the boy seemed quite pleased with everything as it unfolded and came to life. Then, as we were ready to start drifting off he started complaining about the amount of light that was coming into the tent from the setting sun, there was the orange glow of the tent fabric and I had to admit it was a visual experience that you don't get to have most days, and then he told me how much more he loves his mother than me.

I've heard it all before, many times.

I snapped, packed everything in the car, told him that he could have mom if that's what he most wanted. We went home and fell asleep in my bed. He had been upset, so I did not want to traumatize him by making him sleep away from me. Then, he kicked me and poked me all night so that I could not sleep, reminding me what turmoil I caused by his great admitted love for his mother.

I am racing a four year old to maturity, and losing.

So, now I depart for the weekend, to go camping with friends near Santa Cruz. Hiking, to clear the mind of the non-essentials.

If you don't hear back from me, you'll know: it was bears.