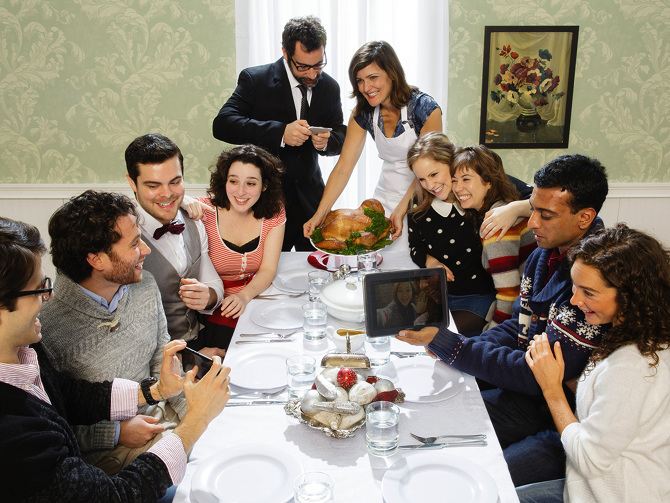 We spent the holiday with a large, warm, well-adjusted family. I focused on being pleasant, and when the opportunity presented itself, even charming. Not too charming. That's the key, try to avoid being "too" anything. That strategy has caused me problems in the past. Insisting on one part of myself, using it as a social mechanism, a wedge to prove differences. I would call it a "defense" but too often it comes across as an offense, a heresy. The Martin Luther of Thanksgiving.

All families possess both microcosmic and macrocosmic components. It is best to understand that before announcing "interesting" large-scale social ideas at dinner. If somebody says "We need to get rid of the politicians!" I'll respond with, "Sure, as a start. Then we should behead all of the older cops."

Nice people are nice, though.

Niceness provides a comparative perspective from which to better assess certain human attributes. I almost wrote "comparative basis" but that would be disingenuous. I don't wish to mount an attack on the underlying meaning and value of "family" and the potentially strict, poisonous qualities of others' "expectations of pleasantness" this morning.

Families can be very warm and supportive, up to a point. You must wish to be somewhat like them and act in accord with their values to fully enjoy the benefits of their love. Decorum is doctrine. Few families encourage lifelong directionlessness, particularly the artful or intoxicated kind. I don't necessarily mean alcohol, or not just that. I mean the intentional compromise of one's faculties through the regular excess of the mind, though also in the occasional augmented capacity.

I partially kid, in an effort to distill then dilute, my meaning.

In the few paragraphs above I tried to find a way to say that we all had a nice Thanksgiving. Do you now see the dilemma? Some who read here might not, others will. It is a common affliction, to know that you will only ever fit in to the degree that you can contain, and even betray, yourself. It is the value-exchange that many are willing to make. It happens everywhere and for all time. The benefits of part-time family membership are mitigated. Many covet the gold card amenities.

The idea of having one's own family was sold to me as the ideal antidote to this feeling. I should have recognized earlier that maybe all I ever wanted was a part-time membership. It was the purchasing of the full condo in the hills instead of the time-share on the beach that seems to have finally forced this realization. The homeowner dues nearly broke me. The association bylaws contained so little negotiable fine print. It all became a crash course in contract redesign, renegotiation, and the subtle art of reneging.

Though everyone at the front desk seems quite happy to keep me on as a silver-card holder.

I just have to remember to always bring my own towels.